​Arsenal take on Valencia in the first leg of their Europa League semi final on Thursday at the Emirates Stadium.

Unai Emery's men were awarded with a tie against the La Liga side after overcoming Napoli 3-0 on aggregate in the quarter finals.

These two sides haven't met since 2003, with ​Arsenal winning only one of the five fixtures between these sides, coming in a Champions League quarter final match in 2001.

Mesut Ozil and Nacho Monreal both missed the Gunners' ​Premier League match against Leicester but could return on Thursday, while Aaron Ramsey is expected to miss the rest of the season. Petr Cech (GK) - In his final season before retiring, Cech has admitted the perfect send off would be to win a trophy in what would be the last game of his career if he reaches the final. Kept two clean sheets against ​Napoli and will be eager for the same on Thursday.

Ainsley Maitland-Niles (RWB) - The central midfielder has shown his versatility during his time with the Gunners, filling in at right back since Hector Bellerin's season ending injury. Has been inconsistent in the position, but will keep his place for the Valencia game.

Sokratis Papastathopoulos (CB) - Sokratis has emerged as a leader in defence since his arrival in the summer. Will need a commanding performance to keep out Rodrigo and Kevin Gameiro at the Emirates.

Laurent Koscielny (CB) - After being rested against Leicester, Koscielny should reprise his role in defence.

Shkodran Mustafi (CB) - With Nacho Monreal set to be assessed ahead of Thursday, the error-prone Mustafi could start in defence instead of the Spaniard. Granit Xhaka (CM) - Has missed a few games recently but returned for both the games against Wolves and Leicester. Is another player who has a mistake in him, yet has quality on the ball that is much needed in this Arsenal side.

Lucas Torreira (CM) - A fan favourite since signing last summer, Torreira has the tenacity and aggression that is needed for a side that looks to win the ball back high up the pitch. 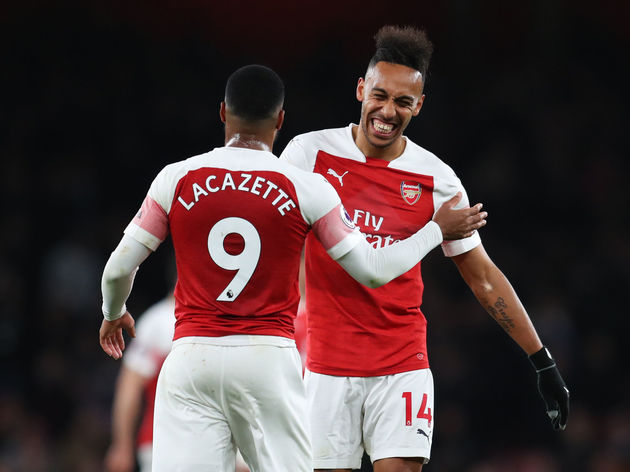 Pierre-Emerick Aubameyang (ST) - The club's top scorer this season has performed admirably considering he doesn't always start up front and on occasion is used as an impact substitute. In nine Europa League games this season he has four goals and would love to add more on Thursday.

Alexandre Lacazette (ST) - Scored a stunning free kick to beat Napoli in Naples in their quarter final victory, and offers something different to ​Aubameyang, showing more willingness to drop deep and link up play.