Thanks to Watford for ensuring that wonderful record remains intact. Unlucky Liverpool!

That said, north London's finest have had plenty of fantastic league campaigns over the years. Not the most impressive Premier League season by any stretch of the imagination. However, there were certain things that stand out that merit 2005/06's inclusion at No.10.

It was the Gunners' final season at their beloved Highbury, and the finalé to the campaign played out beautifully - the near-perfect farewell to the club's spiritual home.

Ahead of the last ever competitive fixture at Highbury, rivals Tottenham sat fourth, in pole position to qualify for the Champions League. Oh, how different the 2007/08 campaign could have been. Arsenal ended up finishing in third, losing just three games. But, they had been top of the league for two-thirds of the season, and started February five points clear of Manchester United.

However, star-striker Eduardo suffered a horrific leg-break, which sparked a downturn in form, and the team were never really able to recover from that point.

Still, throughout the season Arsenal played some excellent football, Emmanuel Adebayor notched 30 goals in 48 appearances, and 83 points remains the highest total for any third-placed side in the Premier League. A third consecutive second-placed finish around the turn of the decade, in this season the Gunners ended up ten points off top spot. Annoying? Slightly.

Still, this season was followed up by the return of the title to north London the following season, so we can label this as 'laying the foundations for title success of 2001/02.'

Thierry Henry was yet again the club's top-scorer, with 22 in all competitions. All in all, not the best of Wenger's early years, but still a pretty solid season to look back on. Wenger's side won two more games than they had the previous season, and they finished on 73 points. However, United's relentless form meant they finished a distant second in the Premier League.

In any case, Thierry Henry, in his first season at the club, finished top scorer with 25 in all competitions. A season highlight was Nwankwo Kanu's memorable final 15-minute hat-trick against Chelsea to win 3-2. Wenger's second full season in charge of the club ended with his side finishing runners-up to Manchester United (of course), who pipped them to the title by a single point on the final day of the season.

To be fair, not bad for a guy who was still acclimatising to England, or rather the country was adjusting to him - he was just that damn good.

Nicolas Anelka netted 19 times, which proved to be his final season in north London. However, the money earned from his move to Real Madrid funded the signing of Thierry Henry as his replacement. As good as Anelka was, Arsenal didn't exactly miss him... 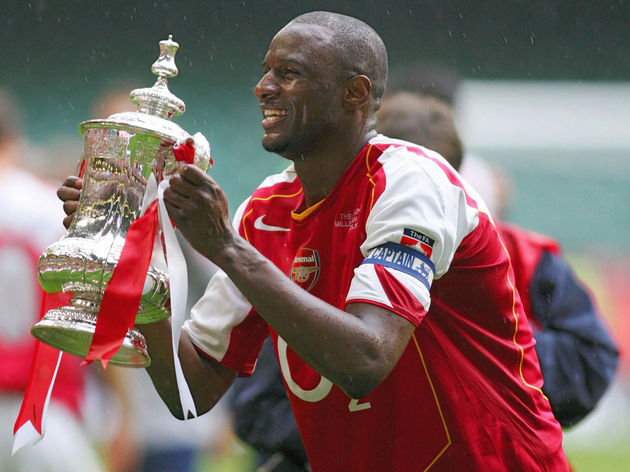 ​After ​Arsenal's remarkable 2003/04 season, the following campaign was memorable in its own way. Wenger's brilliant side managed to extend their record to an unprecedented 49 games without defeat.

And it should have been 50, if it weren't for one of the most unforgivably terrible refereeing performances in history during a 2-0 defeat to Manchester United in October...no Arsenal fans still aren't over that one.

Granted, the Gunners ended up finishing second to a Chelsea side who secured a record (at the time) 95 points, but recorded some memorable wins, including a 5-4 away win at Spurs, a memorable 5-3 comeback against Middlesborough, and a 7-0 thrashing of Everton on the penultimate game of the campaign. Goals, goals, goals. Following their double-winning campaign the season before, Wenger's side amassed a league-high 85 goals, laying the foundations for next year (see No.1) They broke the record for scoring in 47 consecutive fixtures, and went 22 away games without defeat in the league.

Arsène Wenger is famed for predicting that his side, such was their consistently excellent form which saw them go 30 games without defeat, could go the entire season unbeaten. Well, he wasn't wrong, was he? The club's 100th season of competitive football was also the Arsène Wenger's first full campaign in north London - and what an excellent one it was. The Frenchman from Japan, openly ridiculed by his own players let alone the entirety of English football, set the record straight.

It was the first time in seven years that we had won the league title, finishing a point above Manchester United.

To win that title, the Gunners went 18 games unbeaten from the end of December to the beginning of May, with 15 wins during that period.

Wenger was named Manager of the Year, and Dennis Bergkamp PFA Players' Player of the Year. Talk about defying expectations. ​After the bitter disappointment of

After winning 13 on the bounce to end the season, Wenger was named Manager of the Year, Ljungberg and Pires won separate Player of the Year awards, and Henry was the league's top-scorer with 24, and 32 in all competitions. Worthy of all the collective, and individual prizes won, and more. First, huge thanks to Nigel Pearson and Watford, for they did Arsenal a ​huge favour by beating Liverpool 3-0, ensuring the Gunners untouched 49-game unbeaten record remains intact.

A whole league season without defeat. A feat made all the more impressive having missed out on the title in the previous campaign. To be fair, fans should have seen it coming, as Arsène Wenger told you that his team could go a whole season unbeaten.

There really was nothing better than watching Thierry Henry in the form of his life, winning the league at White Hart Lane, and celebrating in front of the Spurs players and fans alike. This team as whole performed to an exceptionally high standard for a lengthy period of time, and rightly goes down in history as one of England's greatest ever.