Arsenal's Shocking Collapse Against Olympiacos Summed Up by Damning Stat

When Arsenal picked up a 1-0 win away from home against Olympiacos earlier in February, it looked like they would cruise through to the Europa League round of 16.

However, they decided to do their best to throw it all away on Thursday, falling to a 2-1 defeat which saw them crash out on away goals, in what has to be seen as one of the worst moments since Arsène Wenger left the club. 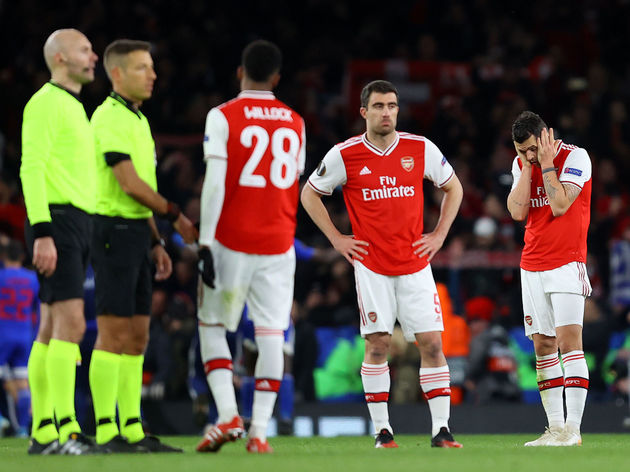 It was a humiliating night for ​Arsenal, who thought they had won it as ​Pierre-Emerick Aubameyang fired home a stunning bicycle kick late into extra-time. Fans shed tears of joy, the club had already started their celebratory tweeting (which is always a bad idea), only for Olympiacos to poke home a late winner following some suspect defending.

To sum it all up, ​Opta noted that it was the first time that Arsenal have failed to progress from a European tie after winning the first leg away from home for the first time ever, having advanced on the previous 17 occasions.

​To make matters worse, they actually had the chance to win the whole thing, only for Aubameyang of all people to fluff his lines and fire wide from close range. There are few players on the planet who you would want in that position more than Aubameyang, but even he couldn't save Arsenal this time.

Winning the Europa League was seen as Arsenal's ticket to the ​Champions League next season. They sit ninth in the ​Premier League table and are currently seven points adrift of the top four, so they really needed this one.

Beating Olympiacos was supposed to be easy - especially with that away goal - but Arsenal did what they always seem to do these days and make hard work of it all, and it ultimately cost them.

 "I just want to concentrate now on lifting those players and getting back the belief, and convince them that there is still a lot to play for, and move on." pic.twitter.com/9sW16X2Umf

The implications for this could be huge. Arsenal probably need to qualify for the Champions League to have any hope of retaining Aubameyang, so there's a delicious irony to the fact that it was his miss which saw them crash out.

For now, the focus simply has to be on winning every possible game, or they will face yet another season away from Europe's top table. Yikes.