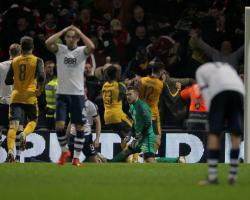 The Gunners came from behind and snatched a last-gasp 2-1 victory to avoid frustration in their FA Cup third-round tie at Championship side Preston on Saturday.

There were also late shows against Southampton, Burnley, Sunderland and Manchester United earlier in the campaign.

Again it was Olivier Giroud doing the late damage, following up his closing-moment heroics against West Brom and Bournemouth with a deflected 89th-minute effort - his fourth goal in successive games - to see off battling Preston.

Wenger said: "I think since the start of the season we have had many, many, many comebacks and many goals in the final minutes.

"But I would first like to congratulate Preston for the quality of their game, especially in the first half where we were outpaced and they played with desire, enthusiasm and quality and they gave us many problems - full commitment for 90 minutes.

"It was a great cup tie and we needed to dig deep to win the game."

Arsenal, who were without Petr Cech, Alexis Sanchez, Mesut Ozil, Laurent Koscielny and Hector Bellerin, were outplayed for much of the first half with Preston looking more like the Premier League team.

The hosts created a number of chances and were unfortunate not to lead by more than Callum Robinson's seventh-minute opener at half-time.

But Wenger's men, slow and error-prone before the break, played with much more purpose after the restart and quickly equalised with a fine Aaron Ramsey strike.

The visitors dominated thereafter but Preston dug in and looked on course for a replay until stand-in captain Giroud pounced following a Lucas Perez backheel.

Wenger, who has never lost a third-round tie in 21 years in charge, said: "Of course, I didn't want to go home and be out of the FA Cup.

We did that in the end."

During a rampant spell in the first half, Preston had a goal disallowed for a foul, a header blocked at point-blank range, a shot cleared off the line and others narrowly missing the target

Jordan Hugill also spurned a gilt-edged chance when he failed to get a touch on a Robinson cross.

"That is the difference - at the top level you have to take your chances," said North End boss Simon Grayson

"But we played really well.

We created some really good chances

That would have been the key

That was the only disappointment really.

"But we stayed in the game, still had chances and asked questions of them

Then obviously we were done by a deflection, which is a cruel way to lose a game."