Arteta out for three months 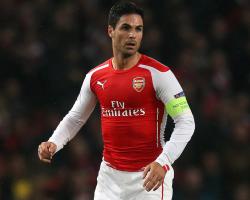 Arteta has not played for the Gunners since November 26, when he suffered a problem with his calf during a 2-0 win over Borussia Dortmund in the Champions League.

The 32-year-old was expected to be out for around a month but a subsequent problem with his ankle means rehabilitation will take "approximately three months".

"Mikel has had surgery which went well

I have just seen him, he is back with us at the training ground," Arsenal manager Arsene Wenger told the official club website.

"He had a limited mobility in his ankle and some persistent inflammation that had an impact on his calf.

"That meant we had to make the decision to have surgery and it's a proper solution which gives him the best chance to recover."