Campbell keen to capitalise on loan 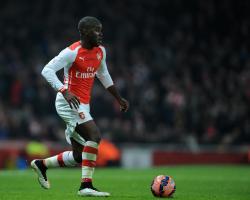 Brazilian defender Gabriel, 24, has received formal approval from the Home Office for a work permit, and is understood to have completed a routine medical at the club's Hertfordshire training base

Arsenal are yet to announce the transfer, reported to be worth around ÃÂ£11million, with some formalities still to be completed.

However, one part of the deal has already been confirmed by Villarreal, with Costa Rica forward Campbell moving to the Yellow Submarines on loan until the end of the season

The 22-year-old has found his first-team chances limited with Arsenal this season, having been integrated into the squad following a loan spell with Olympiacos last season and an impressive World Cup in Brazil

Campbell is eager to make the most of his fresh start in Spain, where he also had a spell at Real Betis in 2012-2013.

"I hope to work hard to do things in the best way," Campbell said on his website, sports.bycampbell.com.

"I want to spend these four months well and succeed here

I am very happy."

Campbell, who could feature against Barcelona on Sunday, added on Twitter: "Ready to work by Villarreal

Excited with this new challenge.

"Thanks to the whole family of Arsenal for their messages

I hope to make them proud."

Arsenal moved into the fifth round of the FA Cup on Sunday with a 3-2 win at Brighton, and will be out to sustain their Barclays Premier League improvement against Aston Villa on Sunday.

Theo Walcott and Mesut Ozil both scored on their return to the starting XI at the weekend weekend.

Alex Oxlade-Chamberlain believes with players of such calibre coming back to full fitness - as England international Jack Wilshere also steps up his rehabilitation - the Gunners can only get stronger over the second half of the campaign.

"For a large majority of the season we have been without Mesut, and Aaron (Ramsey) for a spell and Theo as well, so to have those kinds of players back is only good for us, and I am sure they will come back and play a massive role in the rest of our season," Alex Oxlade-Chamberlain said on Arsenal Player.

"As you look at it at the moment, we are still there or thereabouts and there is still a lot of football to be played.

"We are still in a really good place in the Champions League, still in the FA Cup and in the league it is tight at the top around the teams in third, fourth and fifth.

"Chelsea have a little lead on everyone, but in terms of football to be played I think it is quite exciting to think how the back end of the season could go."