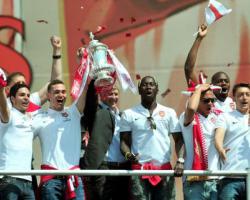 Improbably, the very first tie out of the hat in December's draw, which took place in Hull, was a rematch of last season's final between Arsenal and Hull City.

Hull manager Steve Bruce, whose side lost 3-2 at Wembley last May, described the coincidence as "amazing", and it was to prove the first of no fewer than four final repeats.

Sunderland host Leeds United in a repeat of the 1973 final, when Don Revie's all-conquering Leeds were beaten 1-0 by second-tier Sunderland in a match remembered for a stunning double-save by Jimmy Montgomery.

At Turf Moor, Burnley and Tottenham Hotspur will face off in a remake of the 1962 final, which Spurs won 3-1 after a cagey encounter to defend the trophy they had lifted as part of the Double 12 months previously.

Liverpool travel to fourth-tier AFC Wimbledon in a tie that will rekindle memories of the 1988 final, when the original Wimbledon stunned the newly crowned league champions 1-0 in one of the competition's biggest upsets.

Wimbledon, dubbed the 'Crazy Gang', subsequently left south-west London and became the Milton Keynes Dons due to falling attendances and an inability to build a new stadium, with AFC Wimbledon formed by fans opposed to the move.

"It is one of the most important milestones in our development -- from finally getting out of the Ryman Premier League to getting the rights to our stadium," said Wimbledon chief executive Erik Samuelson.

"To be playing against a Premier League team for the first time -- it has to be up there with them."

One of the most evocative ties of the round takes place on Sunday when third-division Yeovil Town welcome 11-time cup-winners Manchester United to Huish Park.

The teams have met only twice before, with both games coming in the FA Cup

United crushed Yeovil 8-0 in the fifth round in February 1949, having beaten them 3-0 in the third round 11 years earlier.

Chelsea, crushed 5-3 by Spurs in the league on Thursday, visit second-tier Watford, who they have beaten en route to glory in the competition on three occasions, in 1970, 2009 and 2010.

Sheffield Wednesday, meanwhile, could be excused a sense of trepidation ahead of their visit to Chelsea's Premier League co-leaders Manchester City, having been annihilated 7-0 at the Etihad Stadium in the League Cup in September.

Aside from Burnley's game against Spurs, the only other all-Premier League ties are Newcastle United's trip to Leicester City on Saturday and Everton's home game with West Ham United on Tuesday.

The lowest-ranked team left in the competition, Blyth Spartans of the seventh-tier Northern Premier League, tackle Championship side Birmingham City at their 4,435-capacity Croft Park home.

"There is no doubt whatsoever that we are the massive underdogs, but we will go out and give it our all," said Blyth centre-back Nathan Buddle