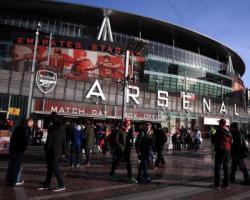 The 24-year-old's arrival has been far from straightforward due to work permit complications, although the Gunners successfully argued the centre-back was an exceptional talent who will benefit the Premier League.

That development paved the way for Gabriel to complete formalities on Wednesday, joining from Villarreal in a deal reportedly worth ÃÂ£15million.

The move has seen Campbell move to Spain on loan for the rest of the season, although the Costa Rica winger penned a new long-term deal at Arsenal before departing.

Gabriel is confident he can develop his game with the Gunners.

The Brazilian said in an interview with Arsenal Media: " It's another dream in my career that has come true

"I have only just arrived, but I am already feeling really good here in London

While respecting everyone, I want to play for my place in the team

I know that is not going to be easy, I must show my potential, I have to show that I can be in the group, that the manager can count on me

"The same goes to all my team-mates

I have always respected everyone to get to where I am in my career, and I want even more."