Levezzi Cavani fail to show up for PSG again 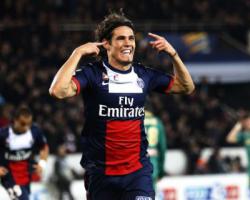 The two had already missed a training camp in Morocco, culminating in a 1-0 friendly win over Inter Milan on Tuesday, further fuelling speculation that one or both could be leaving the club during the January transfer window.

According to the Le Parisien newspaper's Twitter account, the two players arrived back at Paris' Charles de Gaulle airport on a flight at 11:00 (1000 GMT), the precise time the training session in the Paris suburbs was due to begin.

After the pair had failed to show up for the Inter Milan friendly, coach Laurent Blanc said he would be awaiting "some explanation" from both Cavani and Lavezzi.

"They'll arrive on (January) 2 in the morning in Paris," explained Blanc, who refused to be drawn on a possible transfer of either player when the window opens on Saturday.

"We can't say that today

We're going to wait until they arrive," he said

"We'll expect some explanation, and then we'll make sporting decisions as a club."

Inter Milan coach Roberto Mancini, meanwhile, said that the Italian club had not been in contact with Lavezzi.

"Lavezzi is a great player, but he's a PSG player