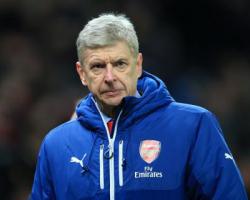 Luke Bryant, 25, from Lymington, Hampshire, was arrested and later charged with going on to an area adjacent to the playing area contrary to the Football (Offences) Act 1991.

He will appear at Southampton Magistrates' Court on January 22.

The incident happened at the end of the match at St Mary's when a fan was seen to run with his arms outstretched in front of the Gunners' boss as he sat in the dug-out, but the man was swiftly bundled away down the tunnel by two stewards.