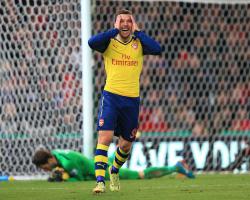 The 29-year-old, who joined the Gunners from Cologne in the summer of 2012, had become frustrated by a lack of first-team opportunities, often used as an impact player from the bench by manager Arsene Wenger.

He has scored three goals this season - including a dramatic last-gasp winner in the Champions League group game at Anderlecht.

Podolski, who was part of the World Cup winning squad in Brazil during the summer, has already linked up with Roberto Mancini's Serie A side and trained in Milan on Monday.

"He is experienced and has a wonderful career behind him," Mancini, the former Manchester City boss, said at a press conference.

"He will help us and is not at the end of his career."