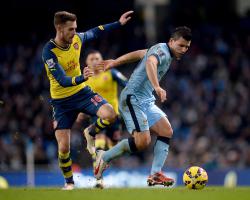 Arsenal pulled off one of the most impressive results of the season on Sunday when they defeated City 2-0 at the Etihad Stadium.

Arsene Wenger's team have a poor record against their top-four rivals, but the Gunners rarely looked in trouble during their trip to the north west and the result means they remain within one point of fourth place.

Arsenal would be much higher in the table had they performed more consistently this season.

The Gunners have not won more than two successive Barclays Premier League games this season, but Ramsey hopes that will now change in light of Sunday's victory over the champions.

"We have got a lot to play for this year so hopefully now we can build on this performance and that will give us even more confidence going into the business end of the season," the Arsenal midfielder said.

"There is still a long way to go in this league

Many teams are taking points off each other

We will just have to concentrate on our own game and hopefully go on a big run and see where that takes us at the end.

"It was important to win because all the other teams won

The pressure was on us.

"Manchester City have made this place a fortress over the years

Not many teams come away with three points so we are delighted with the way we went about it and we are happy we closed the gap."

Sunday's win was the first time Wenger had beaten City in the league since April 2012.

The Gunners have failed to beat Chelsea in just over three years and they have only beaten Manchester United once since 2008.

Last year they scored three times at the Etihad Stadium, b ut on Sunday they also matched that attacking verve with solid, disciplined defending

Ramsey hopes Arsenal's defence will grow in confidence as a result of the win.

"It was important to [get a win away from home against a big team]," the Welshman said.

"We have always been confident coming into these games but we have been a bit too open in the past and we have paid the price for that.

"On Sunday, we defended really well

We kept our team shape tight defensively and we took our chances when we needed to.

"We have shown what we are capable of doing

We are going to have chances in games.

"So if we can keep a clean sheet like we did yesterday, we are always going to have a chance to win."

Surprisingly, no one personified that defensive solidity more than Francis Coquelin, who kept City star David Silva in check all match.

Coquelin has made only 13 Premier League starts in his Arsenal career and just last month he was on loan at Sky Bet Championship side Charlton.

But Ramsey thinks Coquelin is now starting to show why Wenger recruited him as a 17-year-old.

"He's at that age now where he understands the game a lot more and he has done really well in the last few weeks," Ramsey said of the 23-year-old, who has also had loan spells at Lorient and Freiburg.

"It's funny how quickly things can change in football.

He has done a very good job defensively for the team.

"He wins it back, keeps it simple and just keeps things ticking over.

"Hopefully he can build on his performances that he has been showing of late and he has got every chance of turning into a top defensive midfielder."