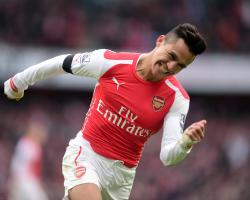 Sanchez scored two goals and made another in Arsenal's 3-0 home win over Stoke City last weekend, taking him to 12 goals and eight assists for the campaign and moving City manager Manuel Pellegrini to describe him as "the best player in England".

The Chilean's unerring finishing and exemplary work ethic will be central to Arsenal's hopes of success at the Etihad, where fortune has deserted them ever since City were taken over by Sheikh Mansour in 2008.

In the years since the Emirati billionaire's acquisition of City, Arsenal have won one, drawn one and lost five of the seven matches they have played at the Etihad in all competitions.

Before that, they had won six of their seven previous trips to City.

Their most recent visit, in December 2013, was infamous, as the title aspirations of a team who went into the match top of the table were ruthlessly torn apart in a humbling 6-3 defeat.

Ahead of Sunday's game they are 11 points behind City, and 13 shy of leaders Chelsea.

Arsenal's fans have learnt to associate Sheikh Mansour with the sight of departing stars, as Samir Nasri, Emmanuel Adebayor, Kolo Toure, Gael Clichy and Bacary Sagna have all left the Emirates Stadium for City in recent years.

But now that Wenger no longer has to weigh the need for new recruits against the cost of building the Emirates, the long-held dream of attracting superstars such as Sanchez to the club has become reality.

Only Sergio Aguero, with 19, has scored more goals this season than the 18 Sanchez has mustered in all competitions and with the City striker in line to make his first start since December 3 after a knee injury, the stage is set for a showdown between the two 26-year-old South Americans.

"There are some other great players, but Sanchez and Aguero are two of the best performing since the start of the season," said Wenger.

"Aguero has been less consistent because he's been injured more -- in the last year he has suffered from being a bit in and out -- but of course he is a world-class player."

If there is one area where Aguero has the edge over Sanchez, it is his record against the big clubs.

It is too early to compare Sanchez's record to Aguero's, but in the five matches he has played against last season's top six, he has found the net only once.

It is an unwelcome echo of Arsenal's record against the top sides, for since the 2012-13 season, they have won only one of the 12 league games they have played against teams who went on to finish in the top four.

With a trip to Chelsea awaiting in two weeks, Aguero may not start, but he is certain to feature at some point after Pellegrini revealed he was "100 percent fit".

City midfielder Nasri will be unable to face his former club after sustaining a calf injury, while Yaya Toure and new signing Wilfried Bony are both at the Africa Cup of Nations with Ivory Coast.

Left-back Kieran Gibbs has been passed fit for Arsenal after a heel problem while Theo Walcott and Mesut Ozil are also in contention.