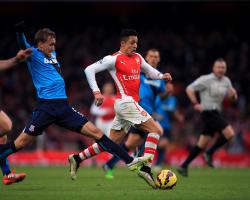 The Chile forward produced another man-of-the-match display, scoring twice, to help his team defeat Stoke 3-0 at the Emirates Stadium on Sunday, which moved Arsenal up to fifth place in the Barclays Premier League.

It has been a remarkable rapid adaptation to the hustle-and-bustle of top-flight English football by the 26-year-old, signed from Barcelona for some ÃÂ£32million after the World Cup.

Although Arsenal manager Arsene Wenger is acutely aware of the dangers of overloading the team's talisman, Oxlade-Chamberlain believes Sanchez's natural energy can carry him through.

He is like a Duracell battery - he just does not give in," the England midfielder said.

"Whether it is a cup competition or times when you think maybe it could be a chance for him to come out and rest, he is the first one to say he wants to play and he always wants to be a part of it.

"Hopefully, he can keep his fitness and keep going, but the athlete that I see every day, I can't see him falling short anytime soon."

Sanchez took his goal tally to 18 against Stoke, the first a superb individual effort having earlier set up Laurent Koscielny's headed opener, before adding a deflected free-kick at the start of the second half.

Oxlade-Chamberlain believes the tenacity of the diminutive South American forward has made his adaptation all the more comfortable.

"The way Alexis has settled in so quickly, you have to give him so much credit for that and I think it is the style of player he is because he is not afraid to get tackled, put himself on the line, work back and work hard," Oxlade-Chamberlain added.

"Sometimes if you come from a foreign league, people may think that is not part of their league at all and they will have to get used to that, but he has come to England and he is more English than anyone I have ever seen in the way he plays.

"He has got the whole package and hopefully it can continue because that is going to help us."

Arsenal's win over Stoke came at a cost, with full-back Mathieu Debuchy suffering a dislocated shoulder when falling into the advertising hoardings after a collision with Stoke's Marko Arnautovic during the first half.

If the problem needs corrective surgery, it could sideline the France international, who was out with a prolonged ankle injury earlier in the season, for several weeks.

With Kieran Gibbs carrying an inflamed ankle, and Calum Chambers laid low by a virus, Wenger accepts Arsenal could be short on defensive cover, which may force his hand in the January transfer window, with St Etienne captain Loic Perrin a long-term target.

Arsenal were, though, able to welcome back Mesut Ozil from the knee injury which sidelined the German playmaker since the start of October.

Ozil said: "It feels great to be back on the pitch after such a long time on the sidelines and I worked hard for this moment.

"As I watched the matches on TV, I started to get nervous, because I really wanted to play again.

"I only trained with the team once on Saturday, but I hope that I will be back at 100 per cent by the end of January."