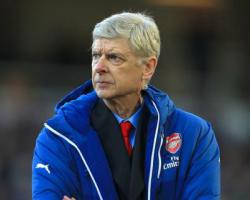 The 65-year-old was once again questioned on the subject of smoking after it was revealed goalkeeper Wojciech Szczesny had lit up in the showers following the 2-0 defeat to Southampton on New Year's Day.

Wenger has dealt with Jack Wilshere being photographed smoking in the past, but recalled a time during his own career when it was normal for people in the game to enjoy a cigarette.

"I spent my youth selling cigarettes and I even smoked myself when I became a young coach," he said.

I did not even recognise myself.

"I grew up in a period when I had to complete military service and at the end of the month we got paid in cigarettes, so they incited us to smoke

I grew up in a pub and you did not see from here to the window because of the smoke."

Wenger, who welcomes Stoke to the Emirates Stadium on Sunday looking to close in on the Premier League top four, knows smoking is no longer as socially acceptable as it was in his day, but concedes he is powerless to stop his players when they are not around the club.

"Times have changed," he said.

"Society has evolved and one of the positives is that people don't smoke so much any more, even in France.

"If you have one cigarette, it is not going to have a big impact on your health

But it does not give out a good example.

"You can smoke in your own home, you have the freedom to do what you want there.

You cannot control players when they're on holiday.

"My issue is that the players here are judged on their performances and the best way to have a high level of performance is to behave as well as possible and to stick closely to the rules which allow you do that.

"I am sure there are some top sportsmen who still smoke, but I'm against it and the best thing is that you don't smoke."

Szczesny has apologised for his actions at St Mary's, where the Poland international was at fault for both Southampton goals, and may yet return to the side for the visit of Mark Hughes' Stoke

He sat out the FA Cup third-round win over Hull, in which summer signing David Ospina deputised.

If you are not mature, you don't make it

These guys are special characters and there is no problem."