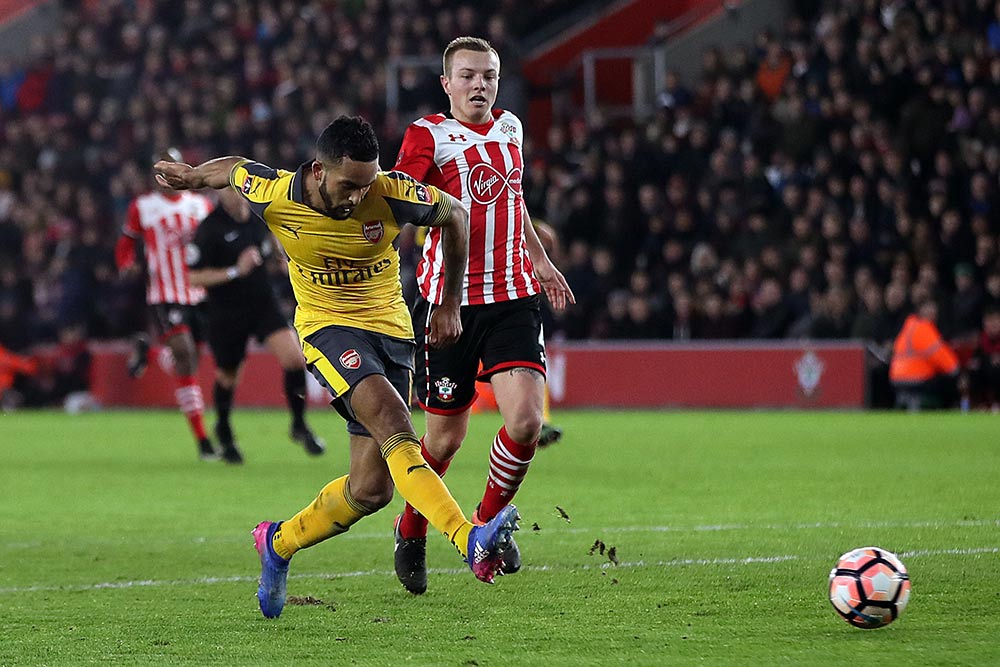 This was a solid away performance - at no point were Southampton in the game.

Frankly my feeling was that this game could have gone either way, but right from the off we played with confidence against a surprisingly poor Southampton side.

The goals - two excellent strikes from Danny Welbeck and a hattrick from Theo Walcott - were a joy to watch. Top stuff from the lads.

Theo Walcott's hat-trick helped Arsenal coast past Southampton 5-0 and into the FA Cup fifth round, with Danny Welbeck also scoring his first goals in eight months.

Welbeck netted twice in just his fourth outing since a second bout of serious knee trouble, before Walcott stole a treble as the Gunners thumped the lacklustre EFL Cup finalists at St Mary's.

Welbeck's double strike offered hope for a future resurgence, and the end to two years dogged by knee problems.

But on the south coast he appeared close to full throttle.

Wenger watched Arsenal's cakewalk from the directors' box, serving the first of a four-match touchline ban for pushing fourth official Anthony Taylor during the frenzied 2-1 win over Burnley last weekend.

The Gunners needed precious little direction in a tie they dominated from start to finish, with both sides making 10 changes to their starting line-ups.

Arsenal's second-string proved far superior, with 19-year-old Ainsley Maitland-Niles impressing from the base of midfield on just his fourth club start.

Southampton exited the competition with scant resistance, with boss Claude Puel left to cling to their status as EFL Cup finalists.

This was a far cry from Saints' league cup semi-final heroics at Liverpool however, with Arsenal building steady pressure through composure in possession from the off.

Welbeck's classy double soon had the Gunners in total control, as the 26-year-old capped a fine training-ground move with a dinked finish for the opener.

Lucas Perez dropped off to turn Maitland-Niles' ball round the corner and set Welbeck away, and the former Manchester United man calmly did the rest.

Saints had barely drawn breath when the Gunners doubled their lead, with Alex Oxlade-Chamberlain's raking pass bisecting the Saints' defence.

Welbeck left Jack Stephens in his wake with another smart run, before rolling the ball between the legs of goalkeeper Harry Lewis, and safely home for the second

Stephens wound up wrapped around the post as his bid for an unlikely clearance ended in vain.

Welbeck then turned provider for Arsenal's third, exchanging passes with Perez before whipping in a low cross for Walcott to wriggle in front of Sam McQueen and flick home.

Southampton only had themselves to blame for the opening, as Stephens' blasted clearance cannoned off the stunned Pierre-Emile Hojbjerg's midriff to gift the visitors yet more final-third possession.

And it was his accurate pull-back cross that let Walcott clip home his second and the visitors' fourth goal.

And when the Chilean rolled the ball into the unmarked Walcott's path, the former Saints forward easily completed his hat-trick to make sure of the Gunners' place in the last 16.