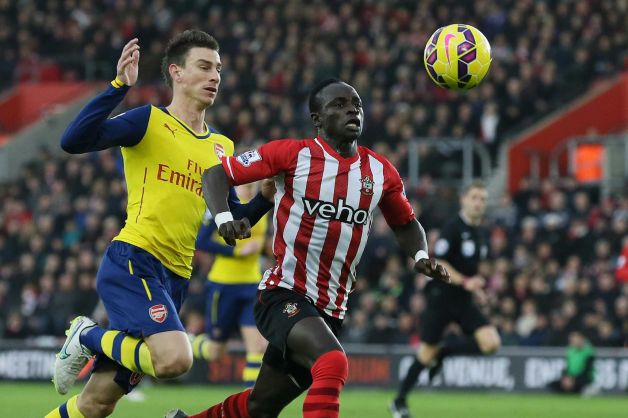 The Saints could easily have won by three more as Arsenal blew the chance to move ahead of the Saints in the Premier League standings.
This didn’t look like a clash between fourth and fifth placed sides, Arsenal resembled a QPR or West Brom.

Early in the first half there were warning signs for Arsenal that Southampton were dangerous. Pelle missed a sitter by the tiniest of margins as Arsenal and Szczesny failed to react.

Arsenal produced a couple of chances of their own at the other end. Cazorla should have scored from a Rosicky cross, but hit it too close to Forster.

Oxlade-Chamberlain came close as well with a volley and Sanchez took a few long range efforts, but they failed to challenge the goalie.

Southampton scored when Mane out hustled Koscielny to the ball near the corner and curled the ball into the empty goal from a difficult angle, the ball perhaps getting a nudge from Mertesacker before it crossed the line.

Where was Szczesny, you ask? He did an Almunia, coming way out of his goal to chase down Mane, then realizing his mistake he attempted to get back only to see the ball curl past him into the empty net.

It was a needless move to come out of goal and Arsene Wenger was visibly furious.

The rest of the half saw the Gunners up the tempo, but fail to create any meaningful chance. The only positive was the departure of Mane, whose hamstring was now acting up.

Did things get any better in the second half. No. The Saints continued to pile on the pressure, often with the help of the Gunners.

Tadic scored the second, courtesy of Debuchy passing the ball back to a prostrate Szczesny, who feebly poked the ball to the goalscorer.

Koscielny made a poor back pass to Szczesny, who managed to get the ball away from Tadic to Pelle, but his shot was cleared off the line by Debuchy.

Pelle had another shot hit the upright and Ward-Prowse could have had three if he could shoot straight.

At the other end the Gunners failed to generate many chances. Sanchez had a shot saved by Forster and the Saints were lucky to not receive a red card for a foul on Sanchez.

Symbolic of the entire afternoon was the appearance of Walcott, who failed to get a single touch on the ball for the first ten minutes he was out there.

Szczesny 4.  Had a significant hand in both goals conceded, particularly the first. It’s been awhile since he’s been punished for wandering too far from goal and today was that day. Despite these errors, he made a couple of good saves during the game, but will want to forget this one.

Debuchy 5.  Not his best day. Partly responsible for the second goal where he should have just cleared the ball. Did save a third going in with a header off the line.

Mertesacker  5.  Given the run around all afternoon. Not a good day.

Koscielny 4.  Partly to blame for the first goal. He looked out of sorts for most of the game.

Gibbs 6.  Offensively looked to attack and penetrate. However, the end product was lacking. Had a good chance where he chose to cross the ball, rather than strike it in the second half. Moments later he shot when he should have crossed.

Coquelin  7.  My co-man of the match. Threw himself about, won many battles, looked positive most of the game. Moved to right back at the end and did produce a stinker of a cross at the end.

Chambers 5.  First time he featured in midfield. Too many back passes in the first half. He was more positive in the second.

Cazorla 6.  Missed our best chance in the first half. There were moments he was effective, but he struggled for most of the game.

Rosicky 6.  Like Cazorla, he played well in moments, but he wasn’t able to impose himself on the game.

Oxlade-Chamberlain 6.  Had one shot that narrowly missed, another was easily saved by Forster. He had a few good runs, but seemed to push things too much and lose the ball.

Sanchez  7.  My other co-man of the match. Somewhat isolated at times and the service to him often consisted of high crosses. Had a free kick which narrowly missed and he tested Forster several times.

Walcott  4.  I don’t know what Steve Bould told him before he went on, but it was obviously not a help. Walcott barely touched the ball.

Akpom  n/a.  Chuba came on, but had little time or service. Where was Podolski today?