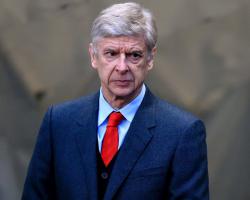 The Gunners battled to a 2-0 win at Manchester City on Sunday, which saw them close back up on the top four of the Barclays Premier League.

Walcott and Ozil have just returned from injury, so watched on from the substitutes bench at the Etihad Stadium, but are expected to be in contention to start Sunday's FA Cup fourth-round tie at Brighton.

Wenger is confident having such strength in reserve, with England midfielder Jack Wilshere stepping up his rehabilitation following ankle surgery, can only boost Arsenal's prospects for the second half of the campaign.

"People reproach you when you have no competition on the bench

When there is one, they question you as well," said Wenger.

"It is true there is competition for places at the moment, that is a luxury that only a club of our stature can afford.

"It can make the players better, because the competition inside the club is always very important to keep the players on their toes.

"These (Walcott and Ozil) are players who are in a bit of a special position, it is not their quality which is questioned, it is just the fact they have just come back from long-term injuries."

Wenger accepts when everyone is fully fit, he will have some serious thinking to do on team selection.

Walcott was sidelined for the best part of a year after suffering knee ligament damage in last season's FA Cup third-round tie against Tottenham, which also shattered his 2014 World Cup hopes for England.

The forward was not able to be at Wembley when Arsenal battled back to beat Hull 3-2 after extra-time to end the club's nine-season silverware quest, but hopes to get another opportunity to lift the famous old trophy come May 2015 having joined in with the open-top bus celebrations which followed around the streets of Highbury & Islington.

"A lot of people say some players have lost some love for (the FA Cup), but not for me at all," Walcott told Arsenal Player.

"I am sure our players, having won it last year, will want to hold on to the trophy, so it is important to start well.

That is something I am desperate to achieve this year.

"It was hard to take definitely, missing (the final), but it is one of those things that happen in football and things happen for a reason."