Sutton given Arsenal draw in the FA Cup 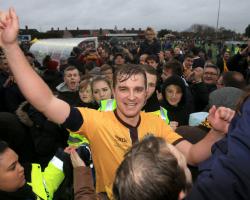 The Vanarama National League side earned rich reward for their defeat of Championship Leeds on Sunday when they were handed a visit from Arsene Wenger's side in the draw for the last 16.

It is the first time in the history of the competition two non-League sides have reached the last 16.

Elsewhere in the draw, Wolves' reward for knocking out Liverpool on Saturday is a home clash with Premier League leaders Chelsea

Oxford, who also pulled off a giant-killing against Championship high-flyers Newcastle, will travel to Middlesbrough.

Tottenham, after surviving a scare against Wycombe, face an all-London clash at Fulham while holders Manchester United and Manchester City will make the short journeys to Blackburn and Huddersfield respectively.

The final tie of the round will see League One Millwall, conquerors of Watford, host the winners of the replay between Derby and Premier League champions Leicester.