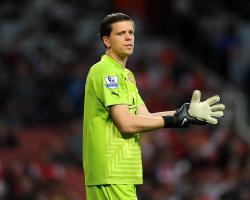 Former Gunners midfielder John Jensen, a close friend of current assistant boss Steve Bould, alleged during comments made as a media pundit for Danish TV at Sunday's FA Cup third round win over Hull that the Poland international had been involved in a heated bust-up with manager Arsene Wenger and was subsequently dropped in favour of David Ospina as a result, a claim which Arsenal have denied.

Reports have since emerged the player had a cigarette following the match at St Mary's Stadium, during which he was at fault for the goals.

Arsenal manager Arsene Wenger has spoken out against smoking in the past, with England midfielder Jack Wilshere having been pictured on two separate occasions with a cigarette.

Speaking in October 2013, when Wilshere was snapped outside a London nightclub in the early hours, the Gunners boss had said: "I disagree completely with that behaviour.

"There are two things - first of all when you are a football player you are an example and as well you don't do what damages your health.

"The fact is that you can damage your health at home, you can smoke at home and you can drink at home, and nobody sees it, but when you go out socially you also damage your reputation as an example."

It remains to be seen whether Szczesny will be recalled for the home Premier League match against Stoke on Sunday.