Szczesnys dad leaps to his defence 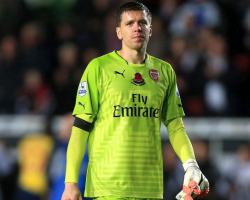 Szczesny has found his position under the spotlight this week following revelations he was caught smoking in the showers after Arsenal's 2-0 defeat at Southampton on New Year's Day, when his errors had played a part for both goals.

Reports suggest the player will be fined around ÃÂ£20,000 for his misdemeanour, but Maciej Szczesny, himself a former Poland international goalkeeper, claims the Arsenal defenders must also shoulder their share of the blame for when things went wrong on the pitch

Speaking in an interview with Polish newspaper Przegladu Sportowego, Maciej Szczesny maintained reports of the smoking incident and a bust-up with Wenger were inaccurate, although he admitted he had not spoken to his son directly about the issue

Maciej Szczesny told the newspaper: "He made a mistake for the first (Southampton) goal, coming too far from the goal, but please look at the Arsenal defence - how these guys are playing is a disaster, but for some reason, nobody pays any attention to it.

"Laurent Koscielny should immediately have run (back) to protect Wojciech, and Per Mertesacker should have stood in the goal.

"Unfortunately they did not do that and gave him zero support, and in that situation Mertesacker showed the agility of a rhinoceros.

"Wojciech is often paying for it (the mistakes), and that he really cares

He needs someone who will critically analyse every game with him, but also remain positive.

"Someone should support him, but the coaching staff at Arsenal are not doing that, meanwhile the entire defence this season is an embarrassment."

Wenger is expected to step up efforts to bring in some much-needed defensive cover as the January transfer window continues.

Arsenal's Costa Rica forward Joel Campbell could be sent to Spain on loan as a makeweight for the Brazilian, who would require a work permit ahead of any potential move to England

Elsewhere, negotiations continue with Legia Warsaw over a proposed ÃÂ£2million move for teenage midfielder Krystian Bielik, while forward Yaya Sanogo is expected to go out on loan, with Bordeaux keen to take him back to France.