The best goals of the Premier League season so far 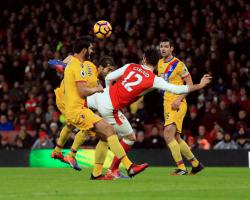 The Frenchman became the talk of social media when he reached behind him with his left boot to flick Alexis Sanchez's cross in off the crossbar to give the Gunners a 17th-minute lead.

While undoubtedly the best goal of the new calendar year, it has some rivals across the whole season.

From England colleague Gary Cahill's clearance, Henderson took one touch to cushion the ball into his path before smashing an unstoppable 30-yard attempt that sailed across Chelsea goalkeeper Thibaut Courtois and into the top corner of his net in the Reds' 2-1 success at Stamford Bridge.

If ever there was a moment where Zaha showed the type of skill which once persuaded Sir Alex Ferguson to make him his final Manchester United signing, this was it

The winger took down a cleared corner and managed to sneak between Sam Clucas and Tom Huddlestone with some excellent close control before unleashing a rocket with his right boot which flew into David Marshall's top corner.

On the same day Zaha was dropping jaws in Hull, Burnley's record signing Hendrick was doing likewise in east Lancashire

His manager Sean Dyche noted: "It's just a shame we're not Arsenal because then it would be shown a 1,000 times instead of maybe four."

Wondering where Giroud got the inspiration for his goal from? Six days earlier Manchester United's Armenian playmaker Mkhitaryan scored with a scorpion kick himself

This one was from a lower angle, closer to the goal - and Mkhitaryan was even offside as he leaned forward and blasted Zlatan Ibrahimovic's right-wing cross into the far corner of the net

It was hailed as the campaign's best strike for less than a week, though...

Sanchez's cross was actually behind Giroud but, with the big forward barely breaking stride, he contorted his body to allow him to reach it with the back of his heel and direct the ball above Wayne Hennessey and in off the underside of the crossbar