Walcott- Gunners can win anything 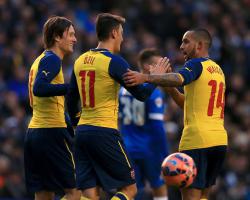 Walcott and Mesut Ozil have started less than 10 Premier League games between them in the current campaign but the pair were both on target as Arsenal edged into the FA Cup fifth round with a 3-2 win over Brighton on Sunday.

Walcott's goal was his first since New Year's Day 2014, with the winger enduring a 12-month absence with a cruciate ligament injury, while Ozil has had a knee problem and was making his first start since October.

The duo's recovery is a timely boost for the Gunners, who have also been strengthened by the returns of Olivier Giroud, Laurent Koscielny and Aaron Ramsey in recent weeks.

"It's like having new signings in the dressing room," Walcott said.

"Having the likes of Mesut back, getting a goal and playing very, very well - the chances will come to get games.

"There is competition for places now and it's going to be a headache for the manager to pick his best 11.

"Those players who have come back have done very well and it just shows we've got a great squad when everyone's completely fit.

"I think we can compete for anything this season now."

Arsenal play Monaco in the last 16 of the Champions League later this month but are currently fifth in the league, 13 points behind leaders Chelsea.

The Gunners' best chance of silverware appears to be retaining the FA Cup after a weekend of shocks saw Manchester City, Chelsea, Tottenham and Southampton all exit the competition in the fourth round.

"We've got to believe that this is a great opportunity and we want to hold on to the cup," Walcott said.

"It's our cup and it's a massive opportunity looking at all of those teams that haven't gone through.

"It depends on the draw but we believe that with the team that we've got and the players coming back to fitness, we can beat anyone."

Tomas Rosicky's superb volley ensured Arsenal held off a second-half fightback from Brighton, who twice reduced the deficit thanks to goals from Chris O'Grady and Sam Baldock.

After an excellent first-half display, the Gunners were left hanging on at the end and Walcott admits the team were just pleased to be through.

"That's what the FA Cup's about," Walcott added.

It was a typical FA Cup tie.

"It was always going to be tough given the results that happened on Saturday so the most important thing is to go through - we did that and we're into the next round."