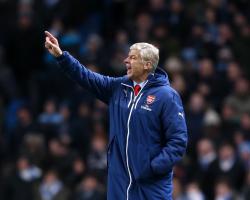 The permanent transfer of the 24-year-old from Villarreal was confirmed on Wednesday night after all the formalities of international clearance on a work permit were completed.

Part of the deal, reported to be worth around ÃÂ£15million, sees Costa Rica striker Joel Campbell move in the other direction on loan for the rest of the season

Wenger admitted Arsenal were short on defensive cover, but although he believes it will take Gabriel time to settle, the Gunners boss insists the player has what it takes to become an integral part of the squad.

"He is a promising Brazilian defender

Just 24 years old and we got the work permit

He has good pace, is good in the challenge and is tall, so he can adapt to English football," Wenger told Arsenal Player.

"Maybe it will take some time to adapt completely, but overall it is very good to have him.

We are convinced about his quality.

"He is very ambitious, focused and serious

From Brazil, he has (then) adapted to Spain

That means he has already made it and adapted in another country, and so that is another important quality."

Arsenal's preferred central defensive partnership has been Per Mertesacker and Laurent Koscielny.

However, Wenger accepts given the wretched run of injury misfortune, to head into the defining period of the campaign with not enough strength in depth at the back would have been folly.

"We needed some cover, or we would not be responsible," added Wenger, who could put Gabriel straight into the squad for Sunday's Barclays Premier League game at home to Aston Villa.

"We needed another centre-back because we have lost (Mathieu) Debuchy

(Nacho) Monreal can play centre-back and we are a bit short there if something happens, especially with the Achilles (problem) of Koscielny since the start of the season.

"(Gabriel) can (also) play right-back and left-back, and that is of course a good quality as well."

Campbell, meanwhile, is hoping to make the most of his second loan spell in Spain, having spent a season at Real Betis as he awaited international clearance to join up with the Gunners' first-team squad.

The 22-year-old said at a news conference ahead of Thursday night's Copa del Rey tie against Getafe: "I am very eager to get started on this new stage in my career.

"A lot of people spoke very well about the club, the first of those being (Arsenal midfielder) Santi Cazorla, who, when it was time, helped me decide to come here.

"I am going to give 200 per cent and I hope my football can bring joy to the fans."

Arsenal, who went through to the FA Cup fifth round with victory at Brighton last weekend, will look to continue their Premier League revival with victory over Villa.

Wenger, however, revealed Chile forward Alexis Sanchez could miss out because of a hamstring problem.

England international Danny Welbeck has not played since December 28 because of a thigh injury, but is expected back early next week ahead of the north London derby at Tottenham