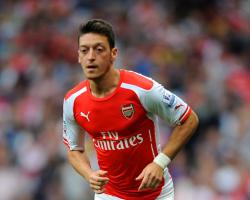 Ozil has just returned to the Gunners squad since suffering a knee injury in the defeat at Chelsea in early October, and made a cameo substitute appearance for the closing stages of the Barclays Premier League win over Stoke on January 11.

Arsenal's club record signing watched on from the bench as his team-mates battled to a 2-0 win at Manchester City last weekend, but along with fit-again Theo Walcott is expected to be involved for Sunday's FA Cup fourth-round tie at Brighton.

Ozil put in plenty of hours in the gym during his rehabilitation, in a move which Wenger believes will help the midfielder return stronger for the rigours of Premier League football, which at times proved something of a culture shock last season following a ÃÂ£42.5million switch for Real Madrid.

"Ozil is fit and worked very hard and now it is down to him playing games," said Wenger.

"He has worked hard, I think he has taken to the fact that he wants to be stronger.

"You have more time to focus on it

Every day he is in the gym, you also you don't have the fatigue of the games - and it is better when you look in the mirror."

Wenger believes the combination of improved physical conditioning can only help develop the combative side to Ozil's game.

The Arsenal boss continued: "It is not only down to pure strength when you play football it is down to when to switch your strength on and the timing of your switch on, it is about giving a little push with the elbow.

"I know players like Claude Makelele for instance were not monsters, but he went for a challenge he had the technique to use his strength in a very efficient way

It is a technique more than a power.

"A guy who spends a bit of time in the gym kills his co-ordination and becomes more rigid, winning a challenge is down to flexibility and co-ordination, switching on all the muscles on at the same, right, time and that is not down to (just) lifting weights."

Wenger accepts when he has all of his players available - the likes of England duo Danny Welbeck and Jack Wilshere are still recovering match fitness - then he will have something of a selection headache.

The Gunners boss revealed he saw Ozil's role as "central...

behind the striker - or on the flank where he doesn't like to play", but is confident his squad have enough talent to adapt.

"In our team anyway it is very flexible, when you play on the flank, to move inside," he said.

In Ozil's absence, Alexis Sanchez has become Arsenal's talisman, the ÃÂ£32million summer recruit from Barcelona settling in much quicker to the Premier League.

He will come back very strong and we are in a position where we have the luxury to have him back now and where we have some players who are completely fresh and rested.

"It can be very interesting if you manage to use them well.

"At the moment for me it is a bit sensitive as every game is every important and I have to use players who have not played for four months.

"(Theo) Walcott has been out for one year, so I have to use them at the right moment."