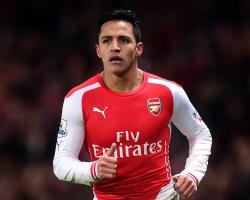 Sanchez has enjoyed a scintillating start to his Gunners career, scoring 18 goals in all competitions since joining for around ÃÂ£35million from Barcelona in the summer.

The Chilean has started all but two of Arsenal's league games this season, and Wenger reckons Sanchez's excellent start to life in England is due to his attitude and versatility.

"He is one of the faster adaptors to the Premier League I've seen," Wenger said.

He feels he is an important player in the squad.

"Sanchez is a player who can play through the middle but in a different way to (Olivier) Giroud because of his mobility.

He gets into areas where you can find him.

"When he gets the ball deep he can run at people but he can play further forward as well because of the timing of his runs."

Former Arsenal striker Thierry Henry, who scored 175 goals for the club, claimed this week Sanchez had been the Gunners' "best signing in the last six years".

Wenger did not disagree with Henry, but believes Laurent Koscielny, who joined from Lorient in July 2010, is also worthy of consideration.

"It is difficult to compare Laurent Koscielny with Sanchez," Wenger said.

"Maybe Sanchez is one of our better signings, but then do you consider the price you pay as well?

"We paid good money for him

Is he value for money? Of course."

Wenger confirmed the club are close to completing a deal for Legia Warsaw's defensive midfielder Krystian Bielik, who underwent a medical with the Gunners on Friday.

The 17-year-old has only made six appearances for Legia this season but Wenger insists the promising youngster will go straight into Arsenal's first-team squad.

"He's a defensive midfielder, he is 6ft 2ins, he has a good energy level and a good technical level," Wenger said.

If he does succeed, it's cheap.

"Of course, it's a gamble

But on what we saw, it's a gamble worth taking."