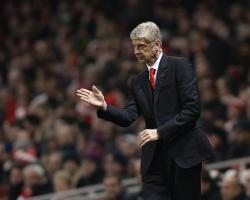 There were the expected sweeping changes for both teams, with England forward Theo Walcott making his first Arsenal start in a year since a serious knee injury, while Hull switched no fewer than 10 players from their Barclays Premier League win over Everton on New Year's Day.

Arsenal made the most of their positive opening, after Costa Rica forward Joel Campbell had seen an early one-on-one opportunity saved, when Per Mertesacker headed the home side into the lead from a corner on 20 minutes.

Any hopes of a comeback by Hull - who had raced into a 2-0 advantage at Wembley last May before losing in extra-time - were ended when Alexis Sanchez capped another man-of-the-match display with a fine curling effort on 82 minutes.

"We had a serious performance and we were in control," said Wenger, whose side lost 2-0 at Southampton on Thursday.

"Of course as long as we don't score the second goal, you never know, but it was a positive game and we created a lot of chances."

"He is lively and always dangerous," said Wenger of the ÃÂ£32million summer signing from Barcelona.

"Alexis has a change of direction, is incisive and penetrating, and has also a good fighting spirit.

"He has a good combination of what you want to see from top players - that means being ready for a fight and talent."

Wenger admitted he was "tempted" to rest Sanchez.

He added: "You look at the players who have that confidence and you are torn between when a player is that confident to keep him on playing or give him a rest.

"But when the players are confident it is important to keep them going, especially when they have that physical potential.

"Sanchez recovers very quickly and he doesn't look in our tests to have any fatigue problem."

Wenger was glad Walcott came through his first real test after recovering from an injury which shattered his World Cup dream.

You could see he hasn't lost the quality of his runs," said Wenger.

"He lacks a bit of competition, but that will come

What he has done tonight after being out for a year is quite positive."

Wenger confirmed the imminent departure of German forward Lukas Podolski, saying only: "He is going to Inter Milan."

France under-21 forward Yaya Sanogo could be another allowed to leave during the January window, preferentially to another club in England, with Bordeaux reported to be interested.

"Podolski was frustrated because he didn't get chance to play, I can understand, but Sanogo is more in search for experience at the top level in the Premier League

"Sanogo is ready to play, but I have so many options up front it is difficult for him to play.

"We huffed and puffed, but didn't have any cutting edge to make the cup tie come alive.

"We had decent possession, but didn't really create any chances in the final third which is disappointing."

Bruce added: "We made 10 changes with all the injuries we have got, and that wasn't a case of disrespecting the cup because we had one of the best days of our lives in the competition last year.

"It was always going to be difficult once we picked them out of the hat."

Hull are in need of reinforcements during January, but Bruce played down suggestions former England striker Jermain Defoe was on his way.

If there is a chance we would be interested in him, but I don't want to get the hopes up of all the Hull supporters

There is a long way to go," Bruce said.