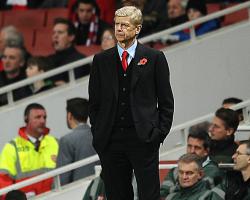 The Gunners were smarting after being beaten 2-0 at home by Bayern Munich on Wednesday night, when Mesut Ozil missed an early penalty and goalkeeper Wojciech Szczesny was sent off.

There was, though, no hangover as the Black Cats - who will face Manchester City in the Capital One Cup final at Wembley next weekend - were swept aside, recalled France forward Olivier Giroud netting twice in the opening 31 minutes.

Tomas Rosicky, replacing Ozil, who had a dead leg, swept in a well-crafted third just before half-time with defender Laurent Koscielny heading in number four on 57 minutes.

Substitute Emanuele Giaccherini cracked home a late consolation for the visitors, but that did not take the shine off what was a very professional performance - watched by former Arsenal forward Dennis Bergkamp, who had earlier had a bronze statue unveiled outside the Clock End.

"Against Bayern Munich, the target was to have a good performance and a good result

We only had the good performance

Of course we were very frustrated, but we had to transfer the positives that we got from this game," said Wenger, whose side remain second, a point behind Chelsea following their dramatic stoppage-time win over Everton.

"We have shown today we are capable of responding and that is the most important thing.

Wenger was pleased to see Giroud return to form, taking his Premier League tally to 12, the second of which followed a terrible back-pass from Argentina defender Santiago Vergini.

"He gave a great response on the pitch and that's what you want," said the Gunners boss, who had left Giroud on the bench for two matches following a lack of form and revelations about his private life.

"He didn't talk - he just came back on the pitch, scored goals and gave an assist

There is no better way to show you are a good player."

Sunderland manager Gus Poyet felt his players had let themselves down with a below-par display which did little to boost their hopes of staying up, now a point adrift of safety in the bottom three.

Captain John O'Shea accepts the Black Cats cannot afford many more bad days at the office if they are to pull clear of danger.

"You're fully aware coming to the Emirates that it can be a tough day, but we helped Arsenal out a little bit with the way we underperformed in the first half," O'Shea told the club's official website channel SAFSee.

"It was very disappointing because of how we'd been performing away from home, going unbeaten for a few months."

O'Shea added: "It is a wake-up call for us, both in the league and ahead of next weekend.

"We have to make sure we look at ourselves individually and collectively, dust ourselves down and go again."