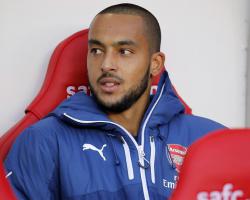 The pacy England forward has featured just twice since being out for almost a year with a serious knee injury, his latest setback being a groin problem suffered while on international duty earlier in the season.

Walcott has been an unused substitute for each of Arsenal's last three games, and may well be given a run-out against former club Southampton on New Year's Day or unleashed from the start in the FA Cup tie with Hull on Sunday.

Wenger admits the 25-year-old is "impatient" to return, but must be managed carefully.

"We will see that when Theo plays, it is difficult to predict

He is certainly a bit edgy as he has been out for so long," said Wenger.

"Theo has been out for one year, so he has to go for contact and today the game does not forgive you any lack of contact or defensive focus and we have to get that (right)," the Gunners boss said.

"You must have that in your mind and have to go through that.

"He has been impatient, of course

Theo is 25, going to 26 and this is an important part in his life for a player."

Wenger continued: "I had that problem with Theo before when he came back from injuries and I have always handled him progressively."

Walcott's recovery was hampered by a groin injury sustained while away with England during the November internationals, a period when Wenger hoped the forward would boost his match fitness with a run-out in the friendly against Scotland.

"I regret it, yes," said the Arsenal boss.

"At the time it looked like a good opportunity for him to get a game because England played a friendly against Scotland and I thought maybe a game or one half of a game would help him get through that and play at a high level competition, but he came back injured.

"He overloaded his groin in training

It can happen, it could have happened here as well and you have to accept that."

With Danny Welbeck a doubt for the Southampton match because of a thigh injury, Wenger could have done with Yaya Sanogo as a back-up, but the France Under-21 forward is carrying a hamstring problem.

Wenger would consider allowing the 6ft 4ins striker out on loan in January to build up his experience.

Both Crystal Palace and French side Bordeaux have been suggested as possible destinations for a short-term deal for the former Auxerre frontman.

"It is a possibility, and I would prefer him to go to a Premier League club," said Wenger.

"Sanogo is a goal scorer and he is not frightened.

"He is a guy who is naturally aggressive and in the modern game that is a vital quality."