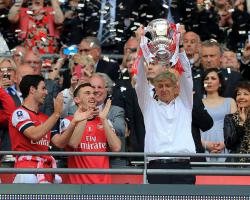 The Gunners host Hull on Sunday in a repeat of what was a dramatic clash at Wembley in the May sunshine, when Wenger's side battled back from trailing 2-0 inside eight minutes to win with a stoppage-time goal from Aaron Ramsey which ended a nine-year quest for some silverware.

Wenger went on to sign a new deal following his side's Wembley triumph, the euphoria which greeted it having seen the Arsenal players on their knees at the final whistle and then some 250,000 supporters turn the streets around the Emirates Stadium into a sea of red and white as the French coach held aloft the famous old trophy once again.

The Arsenal manager, though, insists quitting was never on his mind, no matter what the outcome had been that afternoon some eight months ago.

I do my job as well as I can and I respect my contract," said Wenger.

"It (sense of relief) was because we didn't win a trophy for years and people want that.

"Also, after being 2-0 down after 10 minutes and they nearly scored the third goal, you know that you have very little chances of winning, so the fact that we were 2-0 down and turned it around was a fantastic relief.

"It was nice to see our fans happy and it shows you how happy the club is when you win.

"We want another cup run and we want to, if possible, keep the trophy

We have won it five times in my period (in charge) so that means we know the importance that it has."

Wenger continued: "It is a great memory, but we have a big job to do on Sunday and (after) come back in the Premier League, then we have the Champions League.

"What is for sure is that we have room for improvement and we have to manage to do that quickly."

With on-going injury problems and the suspension of forward Olivier Giroud, Wenger has few options to rotate his squad.

Colombia goalkeeper David Ospina is set to stand in for Wojciech Szczesny, who made errors in both of the goals as Arsenal were beaten at Southampton on New Year's Day, while Theo Walcott is expected to make a long-awaited start in attack.

German playmaker Mesut Ozil is close to a return from his knee injury, but will not be rushed.

Wenger said: "Ozil has been out for three months

Walcott has been out for a year

People don't realise how much time it takes to come back after such a long period."