Wenger- No complacency in our camp 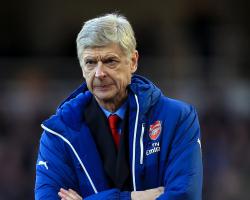 The Gunners head to the Amex Stadium on the back of an impressive 2-0 win at Manchester City last weekend, which moved them closer to the Barclays Premier League top four.

Wenger, though, will be taking nothing for granted against the Seagulls, who have regrouped under new manager Chris Hughton and defeated Sky Bet Championship promotion-chasers Ipswich 3-2 on Wednesday night with two goals from on-loan Liverpool forward Joao Teixeira

"We have to study them well," Wenger said

"In the cup, you have to be ready from the start and people like that can always surprise you if you are not ready."

Arsenal came through a fourth-round tie at Brighton in January 2013 with a late winner from Theo Walcott, but not before being pushed by Gus Poyet's well-organised team who were at the time themselves pressing for the Championship play-offs

"It is always difficult in the Championship away from home," said the Gunners boss

"We remember Brighton from a couple of years ago, it was a very difficult game against a team who were on the way up - they were fighting at the top level with Gus Poyet

"We needed to dig deep to get out with a positive result."

Wenger is expected to rotate his squad on Sunday, which with several players now back from injury could see the likes of Walcott and Mesut Ozil start, having both been on the bench at Manchester City

Goalkeeper Wojciech Szczesny may also return having been out of the side since the Premier League defeat at Southampton on New Year's Day, after which the Poland international was reportedly smoking

Full-back Kieran Gibbs maintains having fought so hard to win the FA Cup last season, with an extra-time victory over Hull at Wembley in May ending the club's nine-year trophy drought, the Arsenal players are determined to enjoy another extended run in the competition

"If you ask any of the players in our dressing room if they want to experience that again, they will all say yes," Gibbs wrote in his blog on Sportlobster.com

"They all want to keep hold of the FA Cup, so it will be another big test for us this weekend against a Brighton side which would love to cause an upset

H opefully, we will come through it okay."