Wenger- Podolski could be off 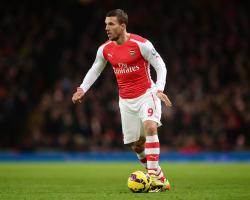 Wenger conceded Podolski would have "had a big chance to start" at Southampton had he been fit, but will now miss Sunday's FA Cup clash with Hull City.

"Podolski was injured today, he has a tight groin," said Wenger.

"He has not practised for a few days now, since our last game at West Ham because of a tight groin.

"So I don't think he will be available for Sunday."

Podolski was an unused substitute in Arsenal's 2-1 win at West Ham on December 28, his last Gunners action coming in the 4-1 victory over Newcastle on December 13.

"The first proposal was farcical; after they came back a bit more serious, then we will see what happens now," said Wenger.

"Inevitable? Not in the transfer market, it's very difficult to say, but we'll see later.

"He was not available because of injury, but he would have had a big chance to start, yes."

Sadio Mane chipped Saints into the lead after Szczesny raced out of his area in an ill-judged attempt to clear the danger.

Dusan Tadic sealed Southampton's victory with a second-half tap-in after a weak, flicked clearance from the Arsenal goalkeeper.

Southampton cemented fourth place in the Premier League by opening up a three-point gap over the Gunners.

The Emirates Stadium boss refused to criticise Szczesny however, nodding when asked if the Poland goalkeeper is already under enough pressure.

"I don't want to talk about that," said Wenger of Szczesny's errors.

"I don't want to make too much a case of it today, it's unfortunate but it was a misunderstanding with (Laurent) Koscielny at the start.

"And after he should have stayed on Mane and not let him take the ball and run away from him.

"It was a bit of regret that we lost this game because it was a self-inflicted defeat," said Wenger.

"We had chances to win this game, and when we were in control we made the mistakes that allowed them to win the game.

"We had lapses of focus in the vital areas, and we paid for it.

"Every time we look like we can get on a run we have a hiccup.

"And we have to learn from that very quickly, because we will need that.

"Today more than the positioning is that a game that was winnable, we lost.

"That's my main concern today more than fourth place, because we need to be consistent defensively at the start."

Wenger felt Florin Gardos should have been sent off for his challenge on Alexis Sanchez that brought a yellow card instead.

"It was definitely a red card," said Wenger.

"It was one against one with the keeper."

Southampton boss Ronald Koeman said victory over Arsenal does not increase his side's chances of a top-four Premier League finish this term.

"This result shows we can beat a big team like Arsenal," he said.

"The draw against Chelsea was important, because after that the players had the belief to win something in a big game.

"We had a fantastic start to the season then we lost five times; we didn't make parties when we were winning, and we didn't make troubles after five defeats.

"We kept it calm and close to the players.

"The message is that you have to be prepared for every game."

Mane hobbled off shortly after opening the scoring, with Koeman admitting he does not know the severity of the Senegal forward's injury.

"He had too much pain and we had to change him," said Koeman.

"We don't know exactly about his injury now, or whether he's available for the cup on Sunday and the Africa Cup for his country."