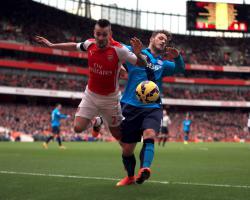 Debuchy has started only nine Barclays Premier League games since joining the Gunners from Newcastle in the summer.

The France full-back was out for three months earlier in the season after undergoing ankle ligament surgery in September and he will now miss the majority of the rest of the campaign with a problem to his right shoulder.

"He is destroyed," Wenger said

"He is such a keen player, so professional and so willing.

But it is not his fault."

Debuchy was carried off on a stretcher during Arsenal's 3-0 win over Stoke last Sunday after he was pushed into the advertising hoardings by Marko Arnautovic.

"The push was not needed," Wenger added.

"It was a bit unlucky as well because there was a divot after the touchline which may have made it worse.