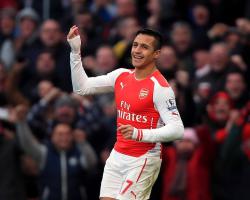 Sanchez scored twice to help sink the Potters, his first a brilliant individual effort on 33 minutes having earlier set up Laurent Koscielny's opener to continue his superb form following a ÃÂ£30million summer transfer from Barcelona.

Wenger is in no doubt surrounding the importance of the consistent performances from Arsenal's star man.

"The better the team plays, the more he is involved in the game," said Wenger, who confirmed full-back Mathieu Debuchy was set for a spell on the sidelines having dislocated his shoulder.

"We had a very offensive team today and Sanchez is confident.

"We can be direct with him, you can run at people a bit more, so there is a good combination offensively.

It is an advantage for us."

Wenger was happy to see Arsenal produce the required collective display, which was in stark contrast to when they had lost away at Stoke in early December.

He said: "It was not a dirty game and I think we kept it clean because we moved very well and we didn't give them any opportunity to get in too many physical challenges.

Overall, I must say that everybody played very well.

That gives us a problem because we are already short of experienced players at the back."

Debuchy, who had only just returned from an ankle problem, was carried off during the first half when he fell into the advertising hoardings after colliding with Stoke's Marko Arnautovic.

Wenger said: "He has a dislocated shoulder

It is difficult (to say how long he will be out) - you need a diagnosis from a specialist.

"We don't know yet, but he will certainly not play next week

This is a position where we are short."

Goalkeeper Wojciech Szczesny, meanwhile, had been left to watch on from the bench as Colombian David Ospina made his Barclays Premier League debut, the Poland international having found himself the centre of some negative headlines earlier this week for smoking in the showers after the defeat at Southampton.

Wenger, however, stressed his decision was not based on any disciplinary action.

The Arsenal boss said: "I do not want to talk too much about that because the more I talk, the less I inform you.

"You know how you can take a decision (like that as a player).

"It was a decision for today's game

Szczesny is our number one competing with Ospina and (Emiliano) Martinez - that is our job."

"We were second best to a good Arsenal side

We allowed them to get the initial goal and it was a difficult day for us," said Hughes, who confirmed the team were now set for a long bus journey home as a result of problems on the trains out of London.

"This is disappointment for us as we have been better against the better teams this season."

Hughes admitted Stoke could just not cope with Sanchez.

"When you see the power he has got and the pace, he is outstanding," said Hughes.

"When you try to close him down in close areas, he has intelligence and understands where everyone is."