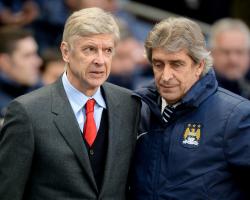 The manner of the 2-0 win last Sunday, when Wenger had deployed Francis Coquelin as a holding midfielder in a 4-1-4-1 formation, drew great praise as the Gunners finally passed a test of character away against one of the Barclays Premier League leading sides.

However, as he prepares to take Arsenal to Brighton in the fourth round of the FA Cup, Wenger sees no reason why the right balance cannot be found between all out attack and a determined rearguard display.

"I go from too romantic to too pragmatic," the French coach said.

"We are not going to change our style

Wenger accepts given Arsenal's recent shortcomings against their top four rivals his team were determined not to get over-run once more, having been taken apart 6-3 at City last season, then 5-1 at Liverpool and 6-0 by Chelsea.

We wanted to be a bit more reassured," said Wenger.

"Last year we conceded many goals in big games, so maybe we were a bit more focused on defending well together, but it is not the basics or philosophy of our game, that (attacking style) will always remain."

Wenger feels the make up of City's side also allowed for Arsenal to profit from a less-than-dynamic approach in which they had just over 35 per cent possession.

"They had a team that was organised to defend well with Fernando, Fernandinho and (James) Milner from the start, so for us it was more difficult for us to keep the ball as much as we usually can," said the Arsenal manager.

"With Yaya Toure they are certainly more dangerous going forward, but certainly less focused on defending, so the game would have been more open if Toure and (Samir) Nasri had been here."

The likes of Theo Walcott and Mesut Ozil could both start against Brighton following their comeback from injuries.

Poland international Szczesny has not featured since the 2-0 defeat at Southampton on New Year's Day, after which he was reported to have been smoking in the showers.

Wenger insisted the decision to retain Ospina for the two Premier League matches following the FA Cup third-round tie against Hull was not down to disciplinary reasons.

"Am I tempted to use my first-choice goalkeeper (at Brighton)? I haven't made that decision," Wenger said.