Arsenal 0 Barcelona 2 - Undone by our own errors 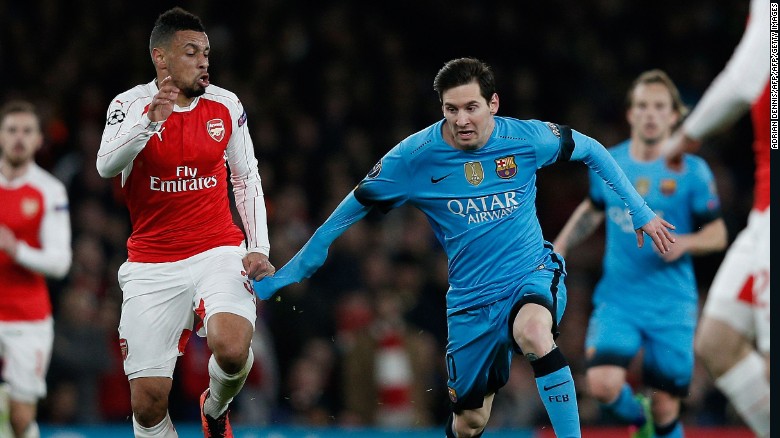 Barcelona are a great side - make no mistake - but for a large part of the game we made them look ordinary. We played with heart, but as usual our lack of clinical finishing meant we couldn't get the opening goal and put them on the back foot.

it's clear that we still need a world class striker - No other side with our ambition is without one.

We also constantly gave the ball away, which against any team is bad, but against Barca is suicidal. Aaron Ramsey continues to be the number one culprit in this regard.

They scored their opening goal from nothing, and their second was a penalty stupidly conceded by Flamini.

Despite all the talk about never giving up, we now have no chance whatsoever of progressing in the competition, and Wenger must face the fact that we're unable to compete with the big boys unless we spend serious amounts of money.

The important aspect of a game like this is that we do our best in every way, and tonight we didn't. We'be seen it all before, and we'll see it again. Let's just move on.

Lionel Messi scored twice with Barcelona's trio of magicians ultimately making the difference as they sealed a Champions League victory at Arsenal.

The holders had plenty of possession but did not have a shot on target in the first half - only for Messi to tuck away his first real chance with 20 minutes remaining before tucking away a late penalty to secure a 2-0 win.

Arsenal had a couple of decent chances of their own but have it all to do in the return leg at the Nou Camp on March 16 if they are to go beyond the round of 16 for the first time since 2010.

Barcelona head coach Luis Enrique had said ahead of the game he simply had to say "abracadabra" and his front three of Messi, Luis Suarez and Neymar would weave their magic.

The trio had 91 goals between them this season leading into this game but, to Arsenal's credit, their defence kept them quiet for long periods.

But a case of committing too many men forward, plus a rash challenge from substitute Mathieu Flamini, was all Messi needed to bag a brace to leave the Primera Division side are heavy favourites to advance to the quarter-finals.

Arsenal again found themselves lacking in attack as Mesut Ozil pulled back for Hector Bellerin to send a shot goalwards - it was blocked into the path of Alex Oxlade-Chamberlain but the England man could not making telling contact and Marc-Andre ter Stegen saved all-too easily despite being in a prone position.

Neymar, Messi and Suarez finally linked up in the dying embers of the first half, only for Nacho Monreal to hook away the latter's cross as he looked to tee up Messi.

And former Liverpool man Suarez missed a great chance on the stroke over the break as he headed Dani Alves' cross wide when free in front of goal.

Petr Cech was forced into his first save of the evening shortly after the restart as captain Andres Iniesta slipped a perfect pass into the path of Neymar, whose low effort was kept out by the Czech Republic international.

The Gunners then enjoyed a spell of pressure which culminated in Giroud pulling a smart stop out of ter Stegen as he headed Monreal's cross low to the German's right.

The tie began to open up as Messi found a rare pocket of space in the Arsenal box but saw his shot blocked by Mertesacker before Suarez drilled across Cech's goal and behind, with Neymar inches away from tapping in at the back post.

There was a communication mix-up as Arsenal went on the attack with Giroud misplacing a pass having been gifted possession and, as Arsenal started to commit men forward, they left themselves open to attack from the triumvirate of Barcelona stars - and they soon paid the price.

Francis Coquelin and Mertesacker both missed vital interceptions as Neymar exchanged passes with Suarez before squaring to Messi, who finally broke his duck against Cech - having not scored in any of his previous eight appearances against the experienced stopper - and broke the deadlock in the tie.

The visitors should have been further ahead soon after when the trio again combined, this time Suarez hit the post from seven yards out and with the goal at his mercy.

Flamini was introduced as Coquelin's engine began to run on empty but the midfielder's immediate impact was to trip Messi after a poor pass from Mertesacker allowed the Argentinian to take control in the area - he duly dusted himself off and sent Cech the wrong way from the spot.

Cech spectacularly turned over a stoppage time Neymar header and that proved to the that for the match, and most people will suggest for the tie, as Arsenal travel to Spain next month needing one of the best performances in their history to reach the last eight.

.@LuisSuarez9 to @neymarjr to Messi! The Argentine finishes off a swift @FCBarcelona counter. #UCL #AFCvFCB https://t.co/SnOBGnG4EY