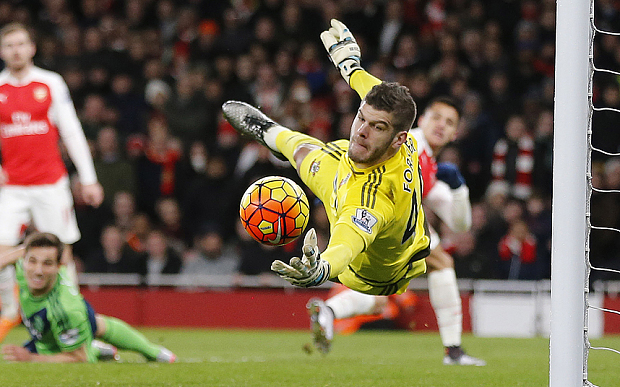 Three points from a possible twelve is not title winning form - we can't seem to buy a goal at the moment, and something has to be done.

It's a case of 'same old Arsenal' - build up the fans hopes then knock them down. Simply not good enough.

We're now back in our usual fourth place, so I'm sure they'll all feel comfortable and at home.

An inspired display from Southampton goalkeeper Fraser Forster earned his side a point at Arsenal as the Gunners lost further ground on their Barclays Premier League title rivals.

There was talk of this being a revenge mission following Saints' 4-0 win in the reverse fixture on Boxing Day but Forster was superb as a string of top-class saves secured a 0-0 draw and a share of the spoils for the visitors.

The 27-year-old was playing just his fourth game after returning from a serious knee injury that had sidelined him for 10 months and his superb performance here means he is yet to concede since coming back into the Southampton side.

His heroics here, most notably from Mesut Ozil and Olivier Giroud, mean Arsenal were the only side in the top six not to win and Arsene Wenger's men have now taken just three points from their last four league outings.

Southampton were without recent acquisition Charlie Austin due to a minor injury and they never looked like snatching a victory to secure a famous double.

Ozil collected a superb through-ball from Alexis Sanchez but his shot was kept out by a smart stop from Forster, a sign of things to come.It was the Germany international who would again come close at the midway point of the first half, this time nipping in behind the defence to poke an Olivier Giroud header goalwards with Forster again making a good save.

Southampton had created chances of their own without truly testing Petr Cech, while a number of misplaced passes and perceived poor refereeing decisions were leaving the Emirates Stadium natives restless at the break.

It was Forster who kept those frustrations bubbling over after the interval, superbly diving to his left to tip Giroud's bending effort behind for a corner.

Sadio Mane could have made things worse as the tricky forward collected a sloppy pass from Hector Bellerin before charging into Cech's box and shooting tamely at the Arsenal stopper.

Forster dived low to keep out a Giroud header moments later as the game started to truly open up with a little over 30 minutes remaining.Amazingly, the England goalkeeper pulled off two more saves - keeping out substitute Theo Walcott and Sanchez - before Laurent Koscielny headed over from six yards.

When Forster could not get there he could rely on his team-mates to do the job as James Ward-Prowse was on hand to turn Sanchez's low drive off the line.

Another tip over from a Giroud header and a close-range stop from Sanchez continued Forster's outstanding solo display and he and his Saints team-mates saw out the six added minutes to take a point from Arsenal, who drop down to fourth, five points behind leaders Leicester.