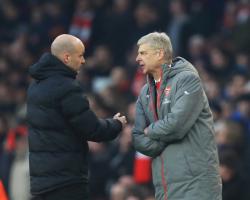 Arsenal kept their hopes of a top-four Premier League finish alive as a late Robert Huth own goal was enough for them to see off reigning champions Leicester.

After the toxic atmosphere of recent weeks diminished somewhat after a semi-final victory over Manchester City at Wembley on Sunday, Gunners boss Arsene Wenger looked like being brought back down to earth by the Foxes.

However, Nacho Monreal's late effort flew in off the unwitting Huth to seal a scrappy 1-0 home win.

Until that point, the hosts had been kept at bay by a well-drilled Leicester defence and some smart saves from Kasper Schmeichel.

But the deadlock was broken with four minutes remaining to take Wenger's side up to fifth, just two points adrift of Liverpool.

Arsenal's new-look back three was a little wasteful in the early minutes, leading to a good chance for Vardy, who fired into the side-netting having been picked out by Marc Albrighton.

The hosts were soon on the front foot but were being kept at arm's length by the Leicester defence, with Francis Coquelin seeing a drive turned behind by Schmeichel.

Monreal, deployed as a member of the back three and fresh from his semi-final equaliser, glanced the resulting header across goal where Danny Simpson did well to scramble away under pressure.

The champions were having much less possession but looked more dynamic on the ball than Arsenal and only a superb save from Petr Cech prevented Riyad Mahrez volleying Leicester ahead at the midway point of the first half.

Schmeichel showed his own goalkeeping prowess as he got down well to push a Theo Walcott effort behind after the forward had worked himself a shooting chance.

Like Monreal from the previous corner, Gabriel got his head to the set-piece but again there was not enough on it to send it goalwards.

Mahrez jinked into the Arsenal box but could only shoot wide as Arsenal were continually frustrated at the other end by a compact defensive display.

Sanchez in particular was starting to lose patience and he rattled the crossbar with an arrowed shot from 25 yards on the stroke of half-time.

It was much the same after the break with Huth clearing behind as Sanchez was played in, with the ball drifting wide of Schmeichel's goal.

The Dane was called into action moments later, stretching to paw a deflected Granit Xhaka strike behind before Laurent Koscielny failed to make decent contact with a header at the culmination of a short-corner routine.

The Arsenal skipper crumpled into a heap with 12 minutes remaining and Leicester substitute Shinji Okazaki almost capitalised, only to see his shot bravely blocked by Gabriel.

Yohan Benalouane was lucky not to be shown a red card by referee Mike Jones after the Leicester defender kicked Olivier Giroud in the back.

Throngs of Arsenal fans headed for the exits soon after but those that stayed saw their side earn what could prove to be an invaluable three points as Monreal's wayward strike crashed into Huth and past the agonising dive of Schmeichel, with Craig Shakespeare's side staying just six points clear of the bottom three.