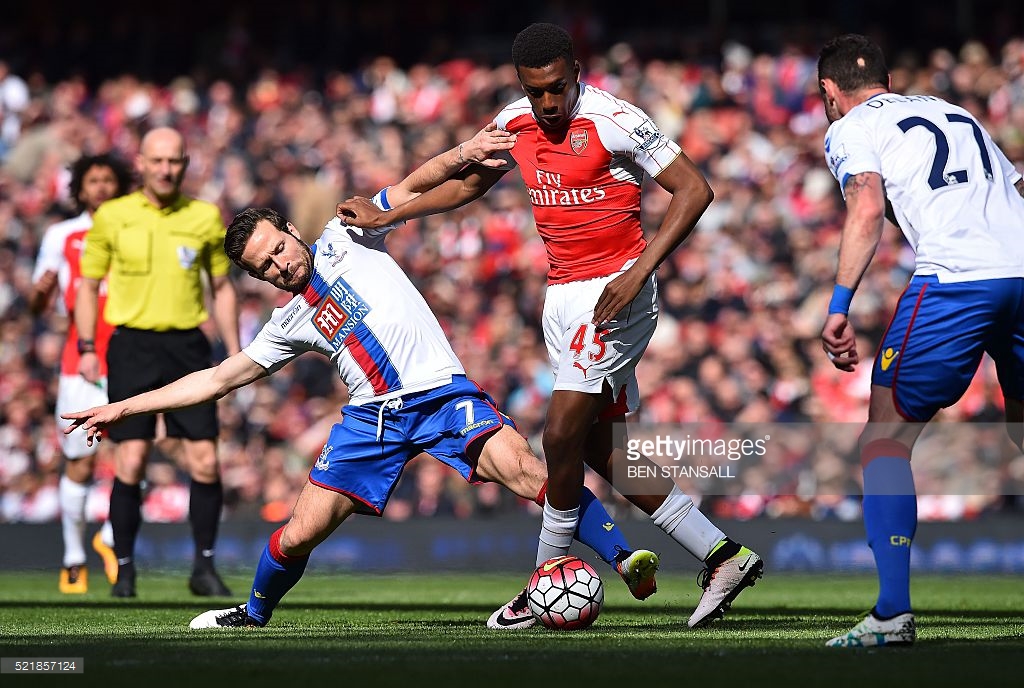 This was truly useless - We had over 70% of the possession, managed to convert one opportunity, then squandered our lead ten minutes from time.

We're now fighting for fourth place - a spectacular comedown after being top of the table ten or so games ago.

We need a major injection of bottle this close season - money must be spent.

Yannick Bolasie's late equaliser saw Crystal Palace take a point from Arsenal to prevent the Gunners from moving back into third place in the Barclays Premier League.

A largely forgettable afternoon ended with drama as Bolasie arrowed in a shot which should have been dealt with by the recalled Petr Cech, cancelling out Alexis Sanchez's opener on the stroke of half-time.

The 1-1 draw sees Arsene Wenger's men draw level on points with Manchester City, but they remain fourth due to an inferior goal difference.

Wenger had been criticised for sticking with David Ospina in goal despite Cech's return from injury, but it was the former Chelsea man who was culpable for an equaliser from Alan Pardew's FA Cup semi-finalists.

The visitors had largely played on the back foot but will welcome a share of the spoils after both Sunderland and Newcastle won on Saturday.

Cech made the game's first save with almost half an hour gone as he easily held onto Bolasie's tame effort before Sanchez saw a 25-yard free-kick clip off the wall and fly just wide of Wayne Hennessey's right-hand post.

The Wales goalkeeper was finally forced into action just minutes before the break as Sanchez poked a pass through to Mesut Ozil, whose shot was kept out by the legs of Hennessey.

Connor Wickham then spurned Palace's best chance of the opening 45 minutes, miscuing a free header inside the Arsenal box just before Sanchez showed him how it was done at the other end.

Danny Welbeck robbed the ball from Palace skipper Mile Jedinak before dinking in a cross which Sanchez looped over Hennessey with his head for his third goal in three games.

Ozil came within a whisker of adding the second with a well-taken free-kick but it remained an afternoon of toiling with the Gunners' attacking talent.

Former Arsenal man Emmanuel Adebayor was introduced to a chorus of jeers just before Hennessey did well to stop Welbeck scoring from close range.

Sanchez almost added a second after reacting quickly to the award of a free-kick and racing in to meet Ozil's set-piece, diverting a header wide.

With the Eagles pushing more men forward in the hope of grabbing an equaliser, Sako saw a header tipped over the crossbar superbly by Cech.

Arsenal's own substitute Olivier Giroud should have done better when presented with the ball, with Sanchez then sending a shot well wide.

And it was not long until Palace made their hosts pay for their profligacy as Adedayor fed Bolasie, who fired in a shot that Cech should have saved but which squirmed past the Czech Republic international and into the corner of the net.

It could have been all three points for Pardew's side as Wilfried Zaha burst into the box in stoppage time only to be stopped by a last-gasp Gabriel challenge.

The leveller leaves Arsenal on 499 Premier League wins and just four points clear of the chasing pack as their hopes of a 20th consecutive top-four finish remains in the balance.