Arsenal 1 Watford 2 - Disappointing and so predictable 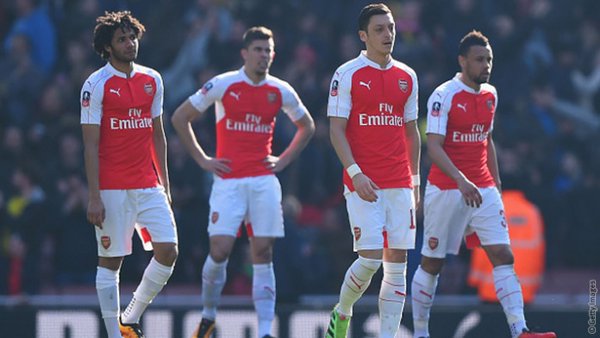 Wenger should be banned from talking to the media. The level of nonsense that he spouts after every game has reached a new low - following today's game he claimed that we didn't deserve to lose! - what a load of bollocks.

There is no way he can justify the lack of passion that the players are showing at the moment, but of course he'll try his best.

Wenger also says 'it's becoming a farce' - The Barca game will be a farce Arsene!

A potentially defining seven days in Arsene Wenger's Arsenal reign started with FA Cup defeat as Watford knocked out the holders in their quarter-final clash at the Emirates Stadium on Sunday.

With murmurs of discontent becoming full-blown cries of derision in recent weeks as Arsenal lurched from one insipid display to another, Wenger needed a result here - and not only to continue in his quest to lift a third-successive FA Cup.

Danny Welbeck's late goal gave hope to the hosts but he followed it up with an incredible miss which sealed a 2-1 defeat and spelt the end of a 37-month unbeaten run in the competition.

Arsenal must overturn a 2-0 first-leg deficit when they travel to face Barcelona in the Champions League on Wednesday and could be as many as 11 points off top spot in the Barclays Premier League before turning out at Everton next weekend.

He had voiced concerns over how his defence would handle Ighalo and Troy Deeney, and he was right to be fearful as both shone.

Arsenal were enjoying most of the ball without testing Hornets goalkeeper Costel Pantilimon and the hosts were lucky not to be reduced to 10 men before the half-hour mark as Gabriel appeared to go into a challenge two-footed on Deeney, only for referee Andre Marriner to wave play-on.

Either side of the challenge, Watford had wasted the ball in good positions, Ighalo twice failing to pick a simple pass to strike partner Deeney on the edge of the Arsenal box.

While Ighalo was guilty of wasting possession at one end, Mohamed Elneny was profligate at the other, twice blazing an effort well wide of Pantilimon's goal when well placed.

Ozil had set up the second Elneny chance with a glorious piece of skill and another wonderful pass through to Joel Campbell set the Costa Rica international away, only for him to scoop his shot over the crossbar.

Ighalo may have been unable to square an easy pass to Deeney, but the Nigeria striker bagged his 16th of the season, holding off Gabriel and firing past David Ospina after Deeney had headed Nathan Ake's throw-in into his path.

Ake almost laid on a second for the striker, bursting forward through the Arsenal ranks before whipping in a low cross which Ighalo failed to connect with.

Watford soon took the game away from the holders as Deeney held off Per Mertesacker before teeing up Guedioura to flash a bullet of a shot past Ospina.

Wenger reacted by bringing on Theo Walcott, Alex Iwobi and Welbeck and the latter pulled a goal back having been played in by a superb Ozil back-heel - but he then spurned the chance to level as he missed a near-open goal after Iwobi and Kieran Gibbs had come close.