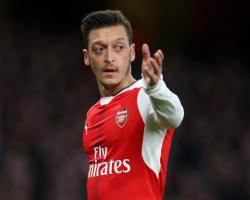 The under-fire Frenchman had failed to beat Mourinho in the pair's previous 12 league meetings but he got his first three points against the former Chelsea boss just when he needed it.

Granit Xhaka's deflected strike gave the hosts a lead at the start of the second half before ex-United striker Danny Welbeck scored his third in as many games against his former employers to secure a 2-0 win.

Arsenal remain sixth despite the win but will still harbour hopes of closing an eight-point gap on Manchester City in fourth.

United still had a strong side despite making eight changes from their Europa League semi-final first leg against Celta Vigo but Mourinho's unblemished record against Wenger never looked like remaining intact.

The likes of Phil Jones, Chris Smalling, Juan Mata and Wayne Rooney came into the side for the visitors, with the latter guilty of missing a great first-half chance.

The recalled Rooney, who has scored more Premier League goals against the Gunners than any other player, headed over an early Mata cross.

The lively early start continued as Anthony Martial ghosted in behind the three-man Arsenal defence to collect a Rooney pass only to see his shot turned behind by Petr Cech.

Both goalkeepers were called on to keep their sides level and it was De Gea who showed why he had been named in the PFA Premier League team of the year as he dived low to tip an Aaron Ramsey shot away from goal following a superb Mesut Ozil pass.

The chances dried up slightly but the mood had been set, Welbeck came close as the half wore on, fit-again Jones bravely blocking his close-range shot.

Smalling was the next to prevent his former colleague opening the scoring with a similar effort as the hosts began to ramp up the pressure.

Alex Oxlade-Chamberlain sold Rooney a dummy and then forced another save out of De Gea with a long-range strike.

Their good work was almost undone as Rob Holding played a pass into his own box which Rooney was alive to, beating Laurent Koscielny to the ball but not tucking it past Cech when clean through.

The half petered out but Arsenal needed less than 10 minutes after the interval to take the lead - albeit with a huge slice of luck.

Xhaka lined up a long-range strike and his speculative effort took a big deflection off the back of Herrera to loop up over De Gea to open the scoring.

And the hosts needed a little over three minutes to double their advantage as Welbeck rose unmarked to head home an inch-perfect Oxlade-Chamberlain cross.

Mourinho turned to Jesse Lingard and Marcus Rashford from his bench but it was Rooney again testing Cech with a low free-kick.

Arsenal had United at arm's length for the remainder of the contest, seeing out the game with professionalism and giving their manager a victory to savour in a forgettable season.