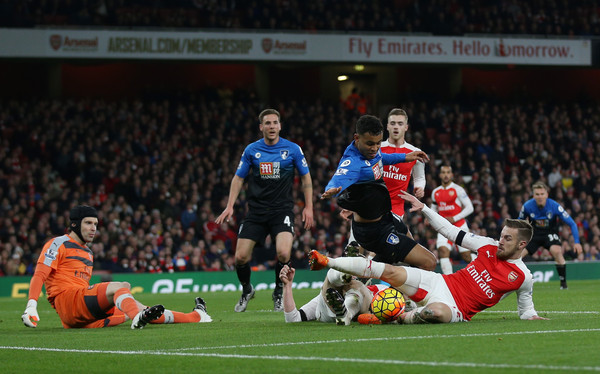 The inspirational player today once again was the irrepressible Mesut Ozil, who's becoming more 'Bergkamp-esque' by the game.

We're now top of the table by a point, albeit we've played a game more than Leicester.

Gabriel and Chambers did well today at the back - will Wenger spend in the transfer window? - i reckon he will.

Another Mesut Ozil masterclass inspired Arsenal to a 2-0 victory over Bournemouth on Monday night and guided them to the top of the Barclays Premier League in the process.

The 27-year-old has been in scintillating form for the Gunners and racked up yet another assist before converting after a classy exchange with Olivier Giroud as they took advantage of Leicester playing on Tuesday to move clear at the summit.

Bournemouth had started well but a first Arsenal goal for Gabriel, who headed home an Ozil corner just before the half-hour mark, set the hosts on their way to a 2-0 victory.

After suffering a sobering 4-0 defeat at the hands of Southampton on Boxing Day, it was their south-coast rivals who were hoping to add to Arsene Wenger's Christmas woes.

Spurred on by recent wins over Premier League heavyweights Chelsea and Manchester United, Bournemouth had Arsenal against the ropes in the early going.

However, Eddie Howe's side could not muster a clear chance and were soon made to pay with their first lapse in concentration at the back.

Gabriel has not scored a goal since his time playing for Vitoria in his native Brazil but he powered home a header from Ozil's corner having given his marker the slip.

And the central defender, in for Laurent Koscielny after the loss at St Mary's not 48 hours earlier, came close to an improbable brace as he glanced a header onto the post minutes later.

The ball came back off the woodwork and into the path of his defensive colleague Per Mertesacker, but the Germany international showed less composure and somehow turned the ball wide from a little over a yard out and with the goal gaping.

Arsenal were starting to turn the screw and Theo Walcott should have doubled their lead when played through but Artur Boruc was equal to his low drive.

The second half began in much the same fashion as the first, with Bournemouth on top and pressing but unable to test Petr Cech.

But again it was Wenger's championship chasers who struck, Ozil playing a neat one-two with Giroud before controlling the ball and slotting coolly home.

Walcott then arrowed an effort just wide on a frustrating afternoon for the England forward as the hosts looked to kill off the contest.

Another Ozil cross was turned wide by Giroud before Bournemouth substitute Eunan O'Kane wasted their best chance as he curled a shot over the bar after being given the freedom of the Arsenal box.

In truth Cech's goal never came under threat as the Czech Republic goalkeeper took his Premier League clean-sheet tally to a record 170.

The game opened up in the closing stages and Alex Oxlade-Chamberlain nearly added a third but his shot was deflected behind with Walcott kept out by Boruc in injury-time having been freed by Ozil.

Arsenal allowed Bournemouth to keep possession as the clock ticked down, with referee Roger East's full-time whistle confirming the Gunners go top for at least a day.