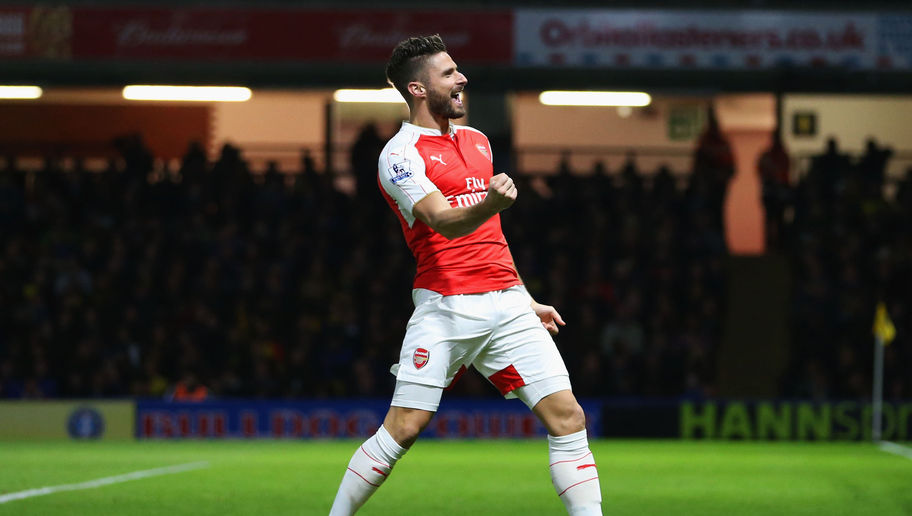 ... But it might all be for nothing depending upon what happens on the next matchday when we travel to Germany,

Bayern are a very well organised side (as you'd expect under Guardiola) but they couldn't break us down - yes Cech kept is in the game but in reality we nullified most of their threatening play despite letting them have most of the ball.

Giroud broke the deadlock midway through the second half with a scrambled goal that was his first touch after coming on to replace Walcott. Ozil put the game beyond doubt in stoppage time with a goal given by the fourth official on the goal line after Neuer made a valiant effort to stop his shot which came from a Bellerin cross.

Unfortunately Olympiakos also won which makes out job harder - at least we're still in it though.

A win in Munich anyone?

Olivier Giroud came off the bench to help give Arsenal a 2-0 win over Bayern Munich and keep alive their Champions League hopes.

The Germans had arrived at the Emirates Stadium in imperious form following a new Bundesliga record of nine consecutive victories and leaders of Group F with maximum points from two European ties.

However, Arsenal - who had lost their first two matches to sit bottom of the table - produced a resolute display and took the lead on 77 minutes when Giroud headed in after a mistake from goalkeeper Manuel Neuer, who had earlier produced a brilliant save to deny Theo Walcott.

German playmaker Mezut Ozil scored a second in stoppage time to seal the win, his close-range effort given by the fifth official after Neuer had clawed the ball back from over the goalline.

The Gunners, though, still have it all to do to qualify for the knockout stages, and next travel to Munich in November.

Bayern supporters held a protest at ticket prices for the opening five minutes - the slogans declaring 'without fans football is not worth a penny' - and were applauded from the home ends when they eventually took their seats.

Arsenal made a bright start, as Ozil found himself with space for a shot from the edge of the Bayern penalty area after a driving run by Alexis Sanchez, but Neuer got down at full stretch to save.

The hosts were then carved open on 11 minutes down the right as a clever one-two from Thomas Muller released Thiago into the box, and his snap-shot was beaten away by Petr Cech.

The Germans, who have scored 38 goals in their 12-match winning run in all competitions this season, continued to dominate possession, and Cech was called on again to parry away a lofted effort from Arturo Vidal.

Arsenal, though, had a great chance to take the lead on 33 minutes.

Nacho Monreal whipped a ball in from the left, which Walcott sent goalwards with a bullet header from six yards. Neuer threw out a strong hand to somehow claw it off the line, with Aaron Ramsey unable to scramble the loose ball in at the far post.

Arsenal resumed the second half with spirits raised from their positive spell, but were soon back on the defensive as the busy Douglas Costa sent a 20-yard rising drive just over.

Wales midfielder Ramsey pulled up with what looked like a hamstring injury on 57 minutes and was replaced by England's Alex Oxlade-Chamberlain.

Bayern were in again when Robert Lewandowski was played clear on the right side of the Arsenal penalty area, but Cech made a superb save with his chest to send the ball over the bar and deny the in-form Poland forward.

It proved a crucial intervention as Arsenal snatched the lead with 13 minutes left.

A deep free-kick from Santi Cazorla caused panic in the Bayern box, where Neuer was caught in no man's land, flapping at the loose ball and Giroud, just on for Walcott, was perfectly placed to bundle a stooped header into the empty net.

With the clock running down, Lewandowski turned into the right side of the penalty area, but delayed his shot under pressure from Laurent Koscielny.

Arsenal broke deep into stoppage time, with Hector Bellerin scampering away down the right. His low cross was side-footed goalwards by Ozil. Although Neuer pushed the ball out and Oxlade-Chamberlain scuffed the rebound over, the additional assistant correctly ruled Ozil's shot had crossed the line.