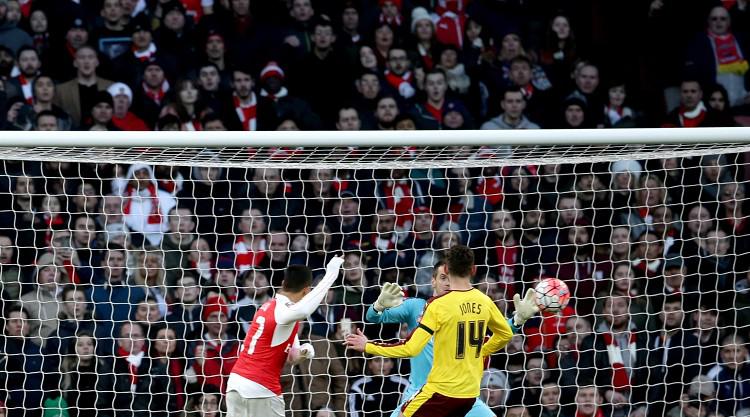 This was an important game - not because it was a cup game, and not because we had to win. It was important because it saw the return of players who (if they stay fit) could deliver a great push for the title.

We've faltered since the likes of Coquelin and Sanchez fell by the wayside, so it's good to see them back.

Another bonus was the debut of Elneny, who looks as though he might settle in pretty quickly.

Alexis Sanchez scored the winning goal in his first start since November as Arsenal saw off a resolute Burnley 2-1 to reach the fifth round of the FA Cup.

Sanchez, who had been sidelined for more than two months with a hamstring injury, laid on Calum Chambers for the opening goal of the game.

Sam Vokes then stunned the Emirates Stadium when he hauled Burnley level with a header after 30 minutes, but Sanchez completed a fine move shortly after the interval to seal the win.

Arsene Wenger vowed to field an experienced side for the fourth-round tie, but the Frenchman made nine changes to the team which started the 1-0 defeat against Chelsea last Sunday.

Olivier Giroud and Laurent Koscielny were the only survivors as Mohamed Elneny made his debut while Francis Coquelin was also back in Wenger's side following a two-month injury lay-off.

Sean Dyche's side, relegated from the Premier League last season, are bidding to bounce straight back into the big time

And for much of the opening half, they showed why they may do just that.

Andre Gray latched on to a Vokes header, but his effort sailed high and wide of David Ospina's goal

They then should have taken the lead when Gray capitalised on a mistake by Koscielny, but his shot was straight at Arsenal's goalkeeper.

It had been a slow start for the Gunners, but the hosts - bidding to win the FA Cup for a third consecutive season - were soon in control, and after 19 minutes came the breakthrough.

Sanchez drifted in from the left-hand side before sliding in Chambers and the former Southampton man, somewhat of a peripheral figure at the Emirates these days, bended the ball round Tom Heaton

It was only his second goal for Arsenal - both have come against Burnley.Arsenal were enjoying more of the possession, but the visitors looked dangerous on the counter-attack and 15 minutes before half-time they found themselves level.

The Arsenal defence failed to clear their lines and, after Coquelin slipped, Tendayi Darikwa's pinpoint cross was met by a Vokes header

It was no more than the Championship side deserved, and suddenly Arsenal found themselves in a game.As the half-time whistle blew, while Arsenal had enjoyed greater possession, they had mustered three shots on target - only one more than the visitors.Arsenal were slow out the blocks in the second half and it was Burnley who brought Ospina into action

Scott Arfield was allowed to coast into the Arsenal area, but his shot was saved at the second attempt by the Colombian.It was beginning to look bleak for the hosts, before Sanchez scored what turned out to be the winner after 53 minutes.Sanchez started the move in his own half before finding Giroud whose neat flick fell to Alex Iwobi

He could not miss, and he didn't

Normal order was restored.Tomas Rosicky then made his first appearance of the season after he replaced the impressive Iwobi with 20 minutes remaining before Sanchez stung the hands of Heaton with a fine free-kick.Sanchez was given a standing ovation by the home fans when he was substituted with 11 minutes remaining, and while Burnley pushed for an equaliser - the best chance falling to Gray in the closing seconds - it was the Gunners who booked their spot in the fifth round.