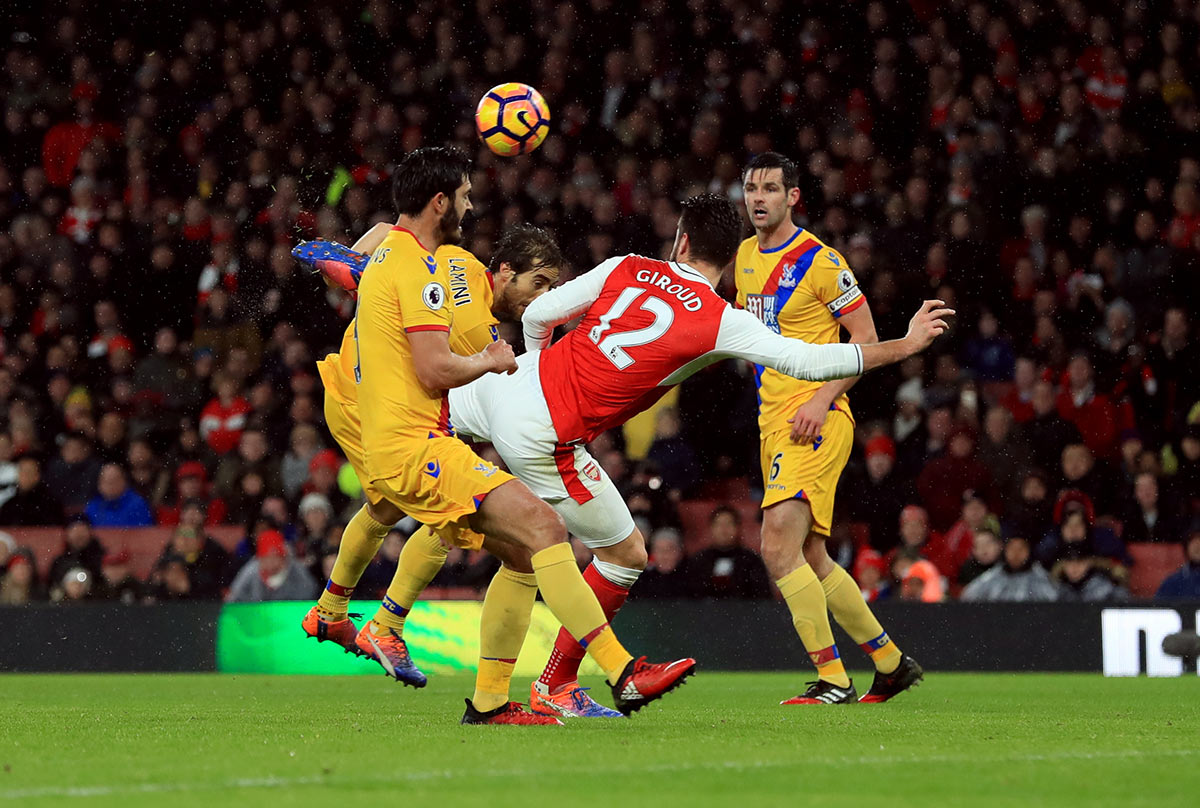 An unbelievable strike from Olivier Giroud set us on the way to three more points.

This was a goal to savour - The cross from Sanchez was played behind the Frenchman, but he outrageously flicked the ball from behind him, over his head and into the net. You have to see it - It defies description...

In reality, the wonder-goal was the icing on top of the cake - This was a decent performance against so-so opposition, and it's the points that matter.

Now we go to Bournemouth on Tuesday, and must keep up the momentum.

A sumptuous strike from Olivier Giroud helped Arsenal start the new year with victory over Crystal Palace and move up to third in the Premier League.

Arsenal face a trip to Bournemouth on Tuesday night, but they began 2017 with the three points they needed to return to the top four, having been temporarily displaced after Tottenham's earlier win at Watford.

Arsene Wenger was unable to call on playmaker Mesut Ozil due to illness, but it made little difference to the outcome as Alexis Sanchez, Lucas Perez and Iwobi all performed admirably behind Giroud.

Giroud missed a simple chance to tuck away Nacho Monreal's cross and the clearance fell to Mohamed Elneny, whose own effort was blocked behind off the head of James Tomkins.

Sanchez, again playing out wide with Giroud in the striker's role, flashed a shot wide of Wayne Hennessey's left-hand post.

The Wales goalkeeper was forced into his first save moments later as he kept out Iwobi's tame effort, but he could do nothing as Giroud opened the scoring.

Palace were on the front-foot only for Perez to break down the move and Giroud to start a counter-attack with a cute flick.

Iwobi then fed Sanchez, who in turn crossed for Giroud, who had burst into the Palace box

The Chilean's ball in was behind the Frenchman, who improvised brilliantly with a back-heeled volley over his head and in off the crossbar.

Elneny then fizzed a low shot wide as the Gunners looked to add to their lead, with Palace unable to offer anything of an attacking threat inside the opening half-hour.

Their first real chance came in the opening moments of the second half, but Christian Benteke could not find the target as he rose at the back-post to meet Andros Townsend's cross.

But it was the hosts who would soon score the game's second goal as Monreal's cross looped up off Scott Dann, with Iwobi heading home despite Joel Ward's best efforts to clear off the line.

The Eagles almost reduced the arrears immediately, but Benteke's bullet header was stopped by Petr Cech, who was also on hand to keep out Yohan Cabaye and Townsend in quick succession.

That proved to be the best that the visitors could muster as a response, although Hennessey did well to stop substitute Alex Oxlade-Chamberlain adding a third in stoppage time.

The loss means Allardyce has taken one point from his first two matches since succeeding Alan Pardew in the Palace hot-seat and continued his wretched run at Arsenal, where he has never tasted victory in the Premier League.

The south Londoners lost 22 games in 2016 and started this year in much the same way to remain 17th in the table and just two points clear of the relegation zone.