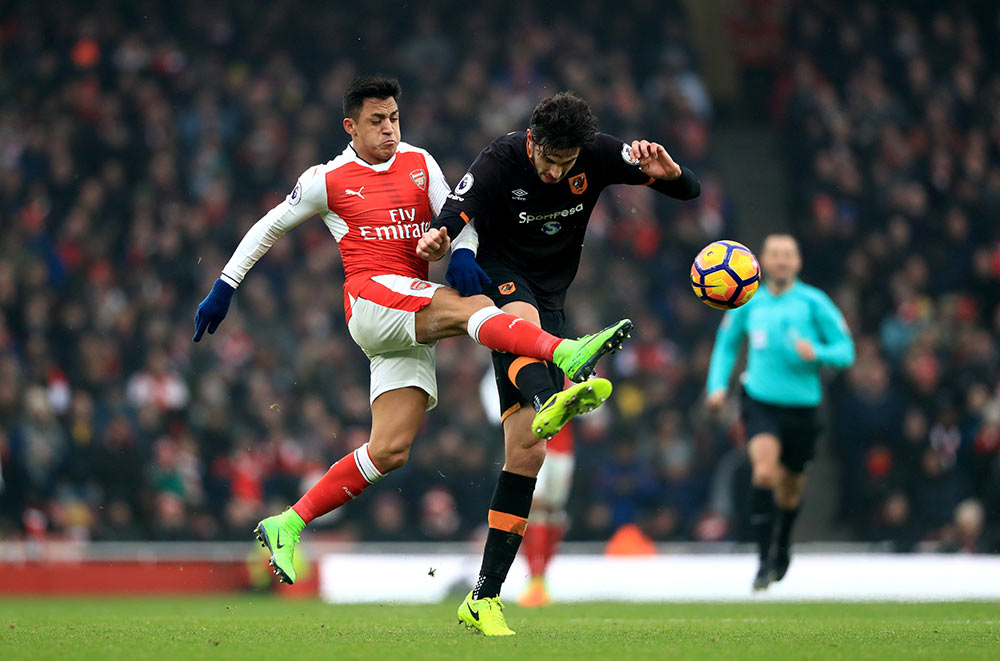 It was a huge relief to get back to winning ways after two consecutive defeats.

Alexis Sanchez was the main man once again with a poachers goal and a penalty to give us the points. This man cannot be allowed to leave the club.

Hopefully we'll fly to Germany with a modicum of confidence and avoid getting rolled over by Bayern.

A double from Alexis Sanchez saw Arsenal seal a crucial win over 10-man Hull in a largely forgettable Premier League clash at the Emirates Stadium on Saturday.

The Chilean opened the scoring with a controversial effort that came off his hand, before tucking away an injury-time penalty after Sam Clucas was sent off for handling Lucas Perez's shot on the line.

Having lost at home to Watford and slipped to defeat at Chelsea in their last two outings, a minority of Arsenal fans once again turned on manager Arsene Wenger.

But, with the Frenchman sat in the stands as he served the last of his four-match touchline ban, his side returned to winning ways.

The victory just about keeps the Gunners in the title picture and means they will retain their spot in the top four ahead of their Champions League trip to Bayern Munich in midweek.

Some Arsenal fans stayed away from the game as a form of protest and their side were not at their best as they eased past Marco Silva's spirited side.

Liverpool loanee Lazar Markovic then danced through into the Arsenal box with ease but his low cross just evaded the onrushing Oumar Niasse.

Petr Cech was called into action soon after as a long ball to Kamil Grosicki caught out the Arsenal defence and the Poland international crossed for Niasse, who header was pushed behind by the Gunners goalkeeper.

Wenger then watched on as his side missed two guilt-edged chances to take the lead as first Hector Bellerin shot into the side-netting and then Sanchez pulled a shot wide from in front of goal.

Arsenal were beginning to dominate possession but were finding it difficult to break down a Hull defence, with Ozil volleying high and wide at the midway point of the first half.

The hosts took the lead in controversial fashion just after the half-hour mark as Kieran Gibbs saw his shot blocked on the line by Andrew Robertson before Sanchez's shot was saved by Eldin Jakupovic, with the ball bouncing off the hand of the Chilean and in.

Hull's players turned and appealed for handball but the goal was allowed to stand despite referee Mark Clattenburg discussing the incident with his assistant.

Cech was again required at the start of the second-half as Markovic outpaced Laurent Koscielny down the flank and crossed for Niasse to test the former Chelsea man once more.

Theo Walcott was booked by Clattenburg early in the second half, with Gibbs fortuitous to only be cautioned moments later as he charged into the back of Markovic - who was advancing swiftly on the Arsenal goal.

Sanchez was booked for simulation having twice been upended by Hull's defence before the busy Niasse sent a near-post header into the side-netting as the Tigers looked to take a share of the spoils.

Wenger threw on Danny Welbeck and Perez in the latter stages in an attempt to make the victory more comfortable and Perez's late shot was blocked by Clucas' hand - Sanchez settling the contest from the resulting penalty after Clattenburg had flashed his red card.