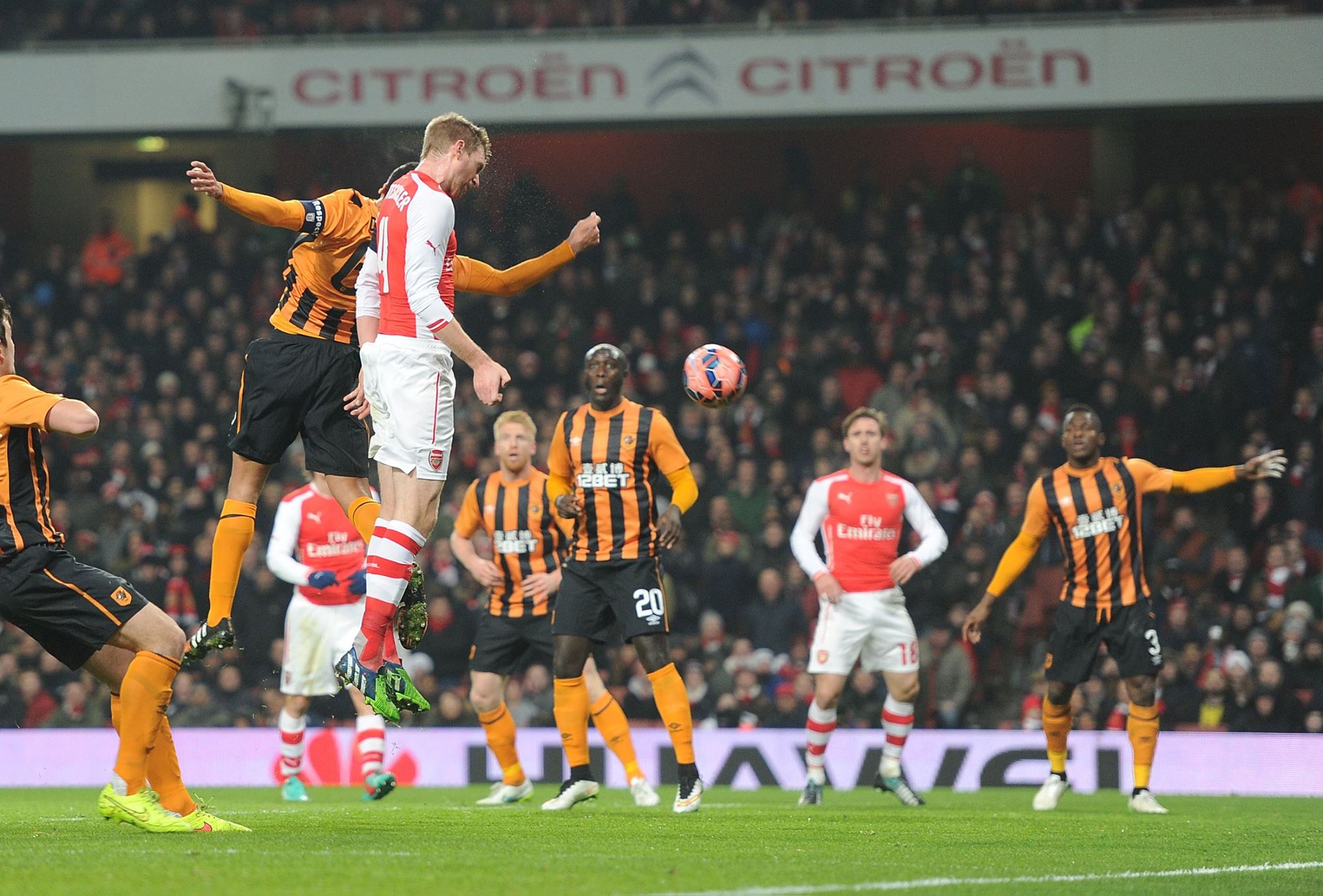 FA Cup holders Arsenal secured their place in the fourth round with a 2-0 win at the Emirates Stadium over last season's beaten finalists Hull.

Both teams made several expected changes, as England forward Theo Walcott returned to make his first Arsenal start in a year following a serious knee injury, while Hull switched no fewer than 10 players from their Barclays Premier League win over Everton on New Year's Day.

The Gunners took the lead on 20 minutes through a header from defender Per Mertsacker at a corner, before Chile forward Alexis Sanchez capped another man-of-the-match display with a fine curling effort on 82 minutes which ended any hopes of a late comeback from the Tigers.

Arsene Wenger's men were in need of a response having lost 2-0 at Southampton on Thursday, and almost got off to the perfect start, but Hull goalkeeper Steve Harper made a reaction save with his feet after Joel Campbell was played into the penalty area by Sanchez.

Arsenal - who had trailed 2-0 after eight minutes at Wembley before coming back to win in extra-time - remained on the front foot, as Walcott put Sanchez in on the right, but his angled chip dropped onto the roof of the net when the better option was a square pass.

After Hull threatened from a couple of set-plays, Arsenal took the lead on 20 minutes after a corner.

Sanchez floated the ball in from the left, and Mertesacker got above Curtis Davies to head down over the line.It was almost 2-0 moments later as some quick passing around the edge of the box as Tomas Rosicky released Sanchez, who rounded the keeper but Paul McShane slid in to knock the ball off the goalline.

Walcott exchanged a one-two with Santi Cazorla and was chipped clear into the left side of the Hull penalty area, but his sidefoot shot was straight at Harper.On 30 minutes, Hull defender Harry Maguire sent a downward header from a corner goalwards, which David Ospina, replacing Wojciech Szczesny in the Arsenal goal, saved low to his left.

The Gunners looked to make a strong start to the second half, with Sanchez making a surging run into the right side of the Hull penalty area before sending in a low, angled drive which Harper saved.Campbell, the Costa Rica forward aiming to earn himself a regular place in the Arsenal side, dragged a shot wide from 20 yards after more promising build-up by the hosts with Walcott then played clear into the penalty area by Sanchez on 66 minutes.However, the England forward - who suffered a serious knee injury in the third round tie against Tottenham this time 12 months ago which ruled him out for the season and also the 2014 World Cup - showed his rustiness as he stabbed the ball well wide.

Walcott then almost got on the end of another angled ball from midfield, before Harper raced off his line to deny Sanchez with a block at the near post.It was no surprise when Walcott was replaced by Alex Oxlade-Chamberlain with quarter-of-an-hour left before, on 82 minutes, Sanchez curled in a sublime 20-yard effort to secure Arsenal's place in the fourth-round draw on Monday evening.