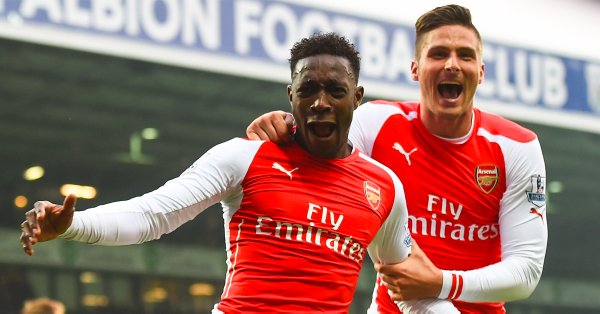 Despite being a goal behind to the team that are currently top of the table, leicester weren't playing pretty football. There were some hard tackles, and tactics reminiscent of the Allardyce Bolton teams of old.

Harsh? - maybe, but Leicester were cynical today, and deservedly went down to ten men. Don't believe what you hear from the apologists on Match of The Day.

Giroud was immense, and what a comeback for Danny Welbeck - his goal just might be the strike that kick starts our title challenge again.

The Gunners had toiled in their attempts to beat the Foxes, who had taken the lead on the stroke of half-time through a Jamie Vardy penalty, but it was substitute Welbeck who glanced home Mesut Ozil's stoppage-time free-kick to secure a 2-1 win which moved Arsene Wenger's men to within two points of Leicester at the top of the table.

Claudio Ranieri's visitors had been reduced to 10 men when Danny Simpson was sent off with 35 minutes remaining but looked to be hanging onto a point after Theo Walcott, also off the bench, had levelled.

But Welbeck, who had not kicked a ball this season before his introduction with a little over five minutes remaining, was on hand to score a stoppage-time winner and inflict just a third league defeat of the campaign on the leaders.

Arsenal made a lively start for the first time in weeks and wanted a penalty with 10 minutes on the clock as Ozil's sumptuous back-heel freed Alex Oxlade-Chamberlain, whose cross into the box was blocked by the arm of N'Golo Kante - with referee Martin Atkinson unmoved.

Leicester goalkeeper Kasper Schmeichel was alert to come flying out of his box as Aaron Ramsey was played through one on one and beat the Gunners midfielder to the ball.Leicester broke as a result and Vardy came close to opening the scoring but Petr Cech brilliantly kept out his downward header from a perfect Marc Albrighton cross.

Olivier Giroud had the ball in the net with 30 minutes gone but his header from Ozil's ball over the top was disallowed as he had just strayed offside before nodding past Schmeichel.Danny Drinkwater picked out Kante free on the edge of the Arsenal box and the summer arrival from Caen bent a curling strike that was destined to whip into the top corner before Cech clawed it behind.

Leicester did take the lead on the stroke of half-time as Atkinson this time decided to point to the spot, adjudging Nacho Monreal to have tripped Vardy inside the box.

While Arsenal protested against the call, Vardy dusted himself off to send Cech the wrong way and send the title favourites in at half-time with the lead.

Leicester had another penalty shout early in the second half when Riyad Mahrez went down under close attention from Monreal, but on this occasion Atkinson took no action

The referee was at the heart of things again moments later as he issued a second yellow card to Simpson after two fouls in five minutes on Alexis Sanchez and Giroud.Ranieri reacted by introducing Marcin Wasilewski and Demarai Gray in place of Mahrez and Shinji Okazaki, while Wenger threw on an extra attacker in Walcott.

And it was the England forward who struck to level the game, finishing coolly from Giroud's knock-down to convert Arsenal's first shot on target of the afternoon.Ramsey put another effort wide when he should have done better but the Gunners had dominated against the 10 men of Leicester.

With Arsenal finding gaps in the Foxes back line it was Sanchez who was next to miss the target when he should have at least tested Schmeichel.

Welbeck was brought on for his first appearance in 10 months as Arsenal continued to press but Per Mertesacker could only glance a free header wide as the home side's frustrations grew.

Giroud finally tested Schmeichel but the Danish goalkeeper was on hand to save well from the striker, who then headed an effort straight into his gloves - before Ramsey again missed the target.

But Wasilewski gave away a late-free kick and Ozil's pinpoint delivery found the head of Welbeck, whose cushioned effort sent the Emirates Stadium into raptures.