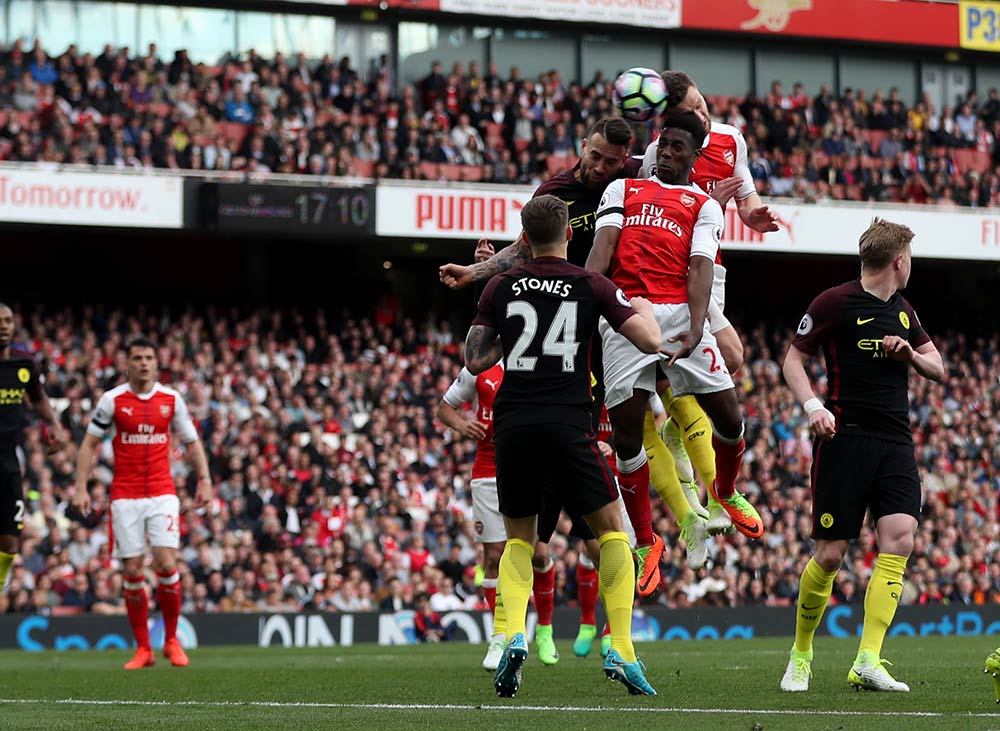 This was not the great recovery that Arsene Wenger would have you believe.

Arsenal proved their season still has signs of life after twice battling back to earn a 2-2 draw with their Premier League top-four rivals Manchester City.

Against a backdrop of uncertainty over the future of manager Arsene Wenger and the supporter protests aimed at ousting the Frenchman, the Gunners showed they can still cut it with the best in the division as they fought for a point.

Leroy Sane put the visitors ahead inside five minutes and Sergio Aguero restored the lead for Pep Guardiola's men just 131 seconds after Theo Walcott had levelled.

Shkodran Mustafi headed Arsenal back on terms once more with just his second goal for the Gunners, who remain sixth in the table as a result - seven points adrift of City in fourth.

Speaking at a planned fans' forum event on Sunday morning, chief executive Ivan Gazidis admitted results over the last six weeks were "a catalyst for change" - although he was not referring purely to Wenger's position.

Arsenal have beaten only Hull, Sutton and Lincoln since February and while Wenger is yet to announce whether he will sign a new deal to stay at the club beyond the end of the season, fans again called for him to leave with a pre-game protest.

Manchester-born Danny Welbeck came within inches of opening the scoring for the hosts at one end but Arsenal's weak underbelly was exposed seconds later.

Willy Caballero's initial goal-kick was cleared by the Arsenal defence but Kevin De Bruyne, playing in a deeper role, played a simple pass in behind Hector Bellerin with Sane latching onto the ball and rounding David Ospina to slide home.

The visitors were well on top and came close to doubling their lead as De Bruyne curled an effort against a post before Ospina pushed away David Silva's strike on the rebound.

Arsenal had calls for a penalty as Fernandinho slid in on Alexis Sanchez but referee Andre Marriner was right to wave away shouts as the Brazilian took the ball.

Sanchez bent a shot just wide of Caballero's left-hand post as Arsenal worked their way back into the game, with the equaliser coming five minutes before the interval.

City cleared their lines only for Gael Clichy to play three Arsenal players onside as Mustafi headed the ball back into the box.

One of those players was Walcott, who was eventually able to stab the ball home despite former team-mate Clichy attempting to atone for his mistake.

But, this being Arsenal, there was a further twist before half-time.

City burst forward and Laurent Koscielny could only hook clear into the path of Silva, who rolled the ball into Aguero to fire home from an acute angle.

Just eight minutes after the restart Arsenal, showing they possess some steel, were level again through Mustafi's header.

The Germany international had been berated moments earlier for attempting to carry the ball out of defence before losing possession, but he rose above Nicolas Otamendi to guide home Ozil's corner.

Arsenal had been hit by the loss of Mustafi's central defensive partner at half-time as an Achilles injury forced Koscielny off, with Gabriel on in his place.

Either side of Mustafi's header, Aguero spurned two decent chances to open the gap further but after the Argentinian's second header was saved by Ospina the game lost much of the tempo.

Substitute Alex Iwobi fired a good chance over the bar in the closing stages while Nacho Monreal survived a stoppage-time penalty scare as the ball appeared to hit his arm before he cleared away.

That was the last action as both sides had to settle for a share of the spoils, with many inside the Emirates Stadium applauding the efforts of the home team.