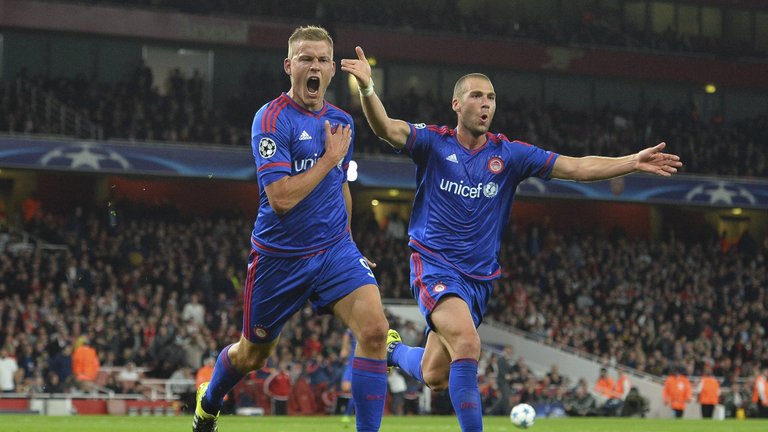 The patterns that we're all used to seeing emerged throughout the game - lack of concentration, poor defending - especially from set pieces - and no cutting edge up front.

Wenger made changes, some of them enforced, for the game. Giroud was suspended following his red card in Zagreb, and of course Welbeck (remember him?) is injured. This left Walcott and Campbell as our only striking options. Not good.

For some reason Cech was made to watch the defeat unfold from the bench - why do we leave a world class keeper on the bench for a 'must win' game like this?

Sanchez worked hard all night, but you have to wonder how long he can stay motivated given that his team mates aren't stepping up to the plate. Scary.

This leaves us with home and away games against Bayern that need to be won - not a bloody chance I'd say.

Stand-in goalkeeper David Ospina had a night to forget as Arsenal slumped to a 3-2 home defeat against Olympiacos to leave their Champions League hopes in jeopardy.

Gunners boss Arsene Wenger had warned his side they already faced a must-win tie following their opening Group F loss at Dinamo Zagreb.

The Barclays Premier League side were behind against the run of play on 32 minutes when a low shot from Felipe Pardo deflected off Alex Oxlade-Chamberlain.

Although Theo Walcott netted a quick equaliser, Arsenal found themselves trailing again when Ospina, chosen ahead of Petr Cech, dropped a corner over the line.

Alexis Sanchez levelled on 65 minutes, but Arsenal hit the self-destruct button once more as Olympiacos immediately scored through substitute Alfred Finnbogason to give the Greeks a first win in England at the 13th attempt.

Arsenal are now bottom of the group, and face a daunting double header against leaders Bayern Munich.

It had been a positive start as Arsenal looked dangerous on the break through Oxlade-Chamberlain, who fired into the side netting, and Walcott, leading the attack as Olivier Giroud was suspended.

The visitors, though, took a shock lead on 33 minutes.

A corner from the right was cut back to the edge of the penalty area, where Pardo drilled in a low shot, which took a massive deflection off the heel of Oxlade-Chamberlain and flew past Ospina.

Arsenal were level within three minutes.

Sanchez got away down the left, and fed Walcott, who beat the offside trap before cutting a low shot goalwards, which squirmed under goalkeeper Jimenez Roberto into the far corner.

No sooner had Arsenal recovered, they hit the self-destruct button again.

A corner from the right was floated in by Kostas Fortounis, which Ospina jumped to collect, but inexplicably patted the ball down behind the line and the goal was immediately awarded by the Dutch fifth official Danny Makkelie despite replays proving inconclusive.

Arsenal aimed to regroup for the second half, but lacked a decisive pass in the final third.

There was an enforced change on 56 minutes when centre-back Laurent Koscielny had to be replaced by Per Mertesacker after picking up what looked like a hamstring injury following a sliding tackle.

Arsenal came close to an equaliser on 60 minutes when Sanchez was played in behind on the right, and his cross into the six-yard box was deflected on to the keeper.

The rebound fell to Mertesacker, whose low shot was saved, with Santi Cazorla smashing the ball goalwards, only for Omar Elabdellaoui to head off the line.

Arsenal remained on the front foot, and equalised on 65 minutes.

Walcott floated the ball in from the right, and Sanchez guided a cushioned header into the far corner.

However, the Emirates Stadium was silenced within a minute as Olympiacos regained the lead.

Arsenal failed to clear from the edge of their own penalty area, and the ball was put back in by Pardo, with substitute Finnbogason clipping it past Ospina at the near post.

Slowly, the home side regained some momentum, with a 25-yard free-kick from Mesut Ozil saved at full stretch by Roberto.

Arsenal, though, could not find a way back into the tie, and now face an uphill battle to qualify for the knockout stages.